What was the deal with what should have been a hit movie? I first presented this post in 2016. 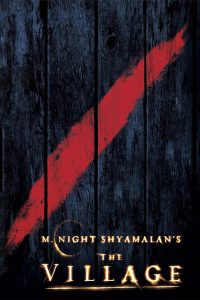 This psychological thriller had movie critics at one another’s throats and close to figurative blows. But why? The Village was written and directed by M. Night Shyamalan, fresh off a run of critical and box office successes that included Signs, Unbreakable, and his mega-hit, The Sixth Sense. Oddly, The Village also proved to be a moneymaker—though as I recall, many moviegoers felt ripped off by the trailers, which appeared to promise a gory horror story but delivered nothing of the sort.

THOSE WE DO NOT SPEAK OF

This film hardly lacked for A-list power. In addition to screen veterans William Hurt, Sigourney Weaver, Joachin Phoenix, and Adrien Brody, it gave us a young, star-in-the-making Bryce Dallas Howard. Its awesome soundtrack was nominated for an Academy Award. And the tension associated with previous M. Night Shyamalan films is palpable throughout most of the story. So what’s the deal? 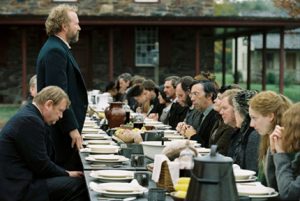 Folks in the village like their simple, communal way of life.

With no spoiler alert in place (hopefully, no one spoiled the ending of The Sixth Sense or Unbreakable for you back in the day), here is a synopsis for (most of) the story. Covington is a small, rural Pennsylvania village in the nineteenth century. (A funeral for a young boy has just been held, his headstone reading 1877.) The residents look sort of Amish-y, though their society is not based on religion. A group of “elders,” all middle-aged, run the show, and everyone seems happy with their simple farming life. The elders have isolated themselves from “the towns” over two decades past, and all have bad memories of living in the “civilized” world, reminders of which are kept in lock boxes.

The village sits in a valley and is surrounded by woods occupied by “Those We Do Not Speak Of” (offspring of Voldemort?), nasty creatures whose very mention scares the crap out of Covington’s young people. The elders claim that they once made a pact with these monsters: no one enters their woods, and the creatures let them live in peace. So far, the arrangement has worked. Occasional growls and bellows from the woods keep the next generation in check, despite their curiosity.

SLOW OF TONGUE, SLOW OF MIND 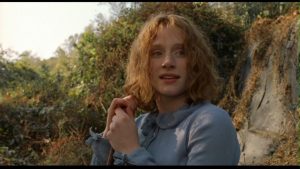 Ivy is a happy girl…at first.

Lucius Hunt (Phoenix), son of elder Alice Hunt (Weaver), usually says little, but after the death of the young boy he reads a brief petition to the elders, asking to go through the woods to “the towns” to acquire medicine for future illnesses. His request is denied, the elders saying that there is wickedness in “the towns”, not to mention the horrors in the woods. Frustrated, Lucius defiantly steps a few yards into the woods and picks some berries. His action brings “Those We Do Not Speak Of” into the village at night, where they kill some livestock and leave warnings on doors. These huge, red-robed creatures appear wolf-like, with vicious claws. (They seldom appear during the film, but the trailers highlighted them, which doubtless caused some of the confusion as to the genre.) 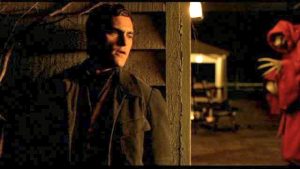 Lucius hides as Those We Do Not Speak Of walk the village.

Ivy Walker (Howard), daughter of chief elder Edward Walker (Hurt), is blind, but she is a warm-hearted young woman with a positive outlook on life, and she is loved by everyone. This includes Noah Percy (Brody), who is retarded and cannot express himself too well.

Lucius and Ivy soon admit that they have strong feelings for each other, and they arrange to be married—though Lucius still wants to travel through the woods to “the towns” for medicine. But before any of this can happen, the jealous Noah stabs Lucius multiple times. The elders believe that infection from the wounds will kill him before long.

The devastated Ivy begs her father to let her travel to “the towns” for medicine to save Lucius. Edward finally caves in and agrees, which really pisses off the rest of the elders. Given that she is blind, two other young men are assigned to accompany her. But before she leaves the village, Edward has something to tell her… 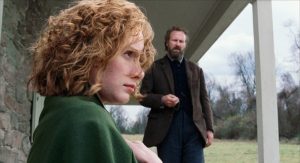 Ivy tells her father that she must go to “the towns.”

I’m going to stop here, even though the film has quite a way to go. Anything I say at this point would ruin the story, assuming you’ve never seen it and are curious about what I’ve said here. This is where the problems likely began for those who saw the film when it was new. Without being too specific, I will mention some issues that arose.

For starters, you can imagine how secretive M. Night Shyamalan had always been about his film scripts. Somehow, the one for The Village was stolen long before the movie premiered, and plot details were apparently released on the Internet. Many scenes were subsequently re-shot, and what had been an ideal OMG and WTF ending now showed up at least fifteen minutes before the conclusion of the film. (That scene remained in the story, and when I saw it I too said “OMG,” totally believing it was the end.)

The rest of the film then became anti-climactic, another issue of many reviewers. Some called it illogical, others laughable. (A fantasy story illogical? How can that be?) But others referred to it as “exquisitely crafted,” and one critic said that “Shyamalan’s orchestration of mood and terror is as adroit as ever.” Did I say “polarizing?” The critics were in two armed camps on this one.

Okay, The Village is not a perfect movie, but I had little to no problems with it. The “mood and terror” are as advertised; the acting, in particular the performances of Bryce Dallas Howard and Adrien Brody, are top-notch; the music is haunting; and a little naïve fantasy, especially in these times, is good for us all.