Throwback Thursday: The Ongoing History Of THE SHINING—Part Three

This post first ran in 2016, and since that time the film version of Doctor Sleep hit the big screen—and the small one. I’ll comment on it at the end.

In 1977, when Stephen King hit the bestseller lists in hardcover for the first time with his classic, The Shining, it became evident that he was on his way. Still, he wasn’t about to call all the shots when his story was optioned for film by the renowned director, Stanley Kubrick. So the movie version, while a classic in its own right, differed in a number of significant ways from the novel, and King fumed over it for many years. We explored the novel and the film—and their differences—in the first two parts of this series. Now we’ll take a look at what King did about the film, as well as his decision to continue the saga of Danny Torrance in a novel. 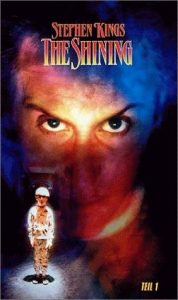 By the mid-1990s mega-bestselling author Stephen King could do just about anything he wanted with regard to how his novels were adapted for the large or small screen. For The Shining, he chose a TV mini-series—four-and-a-half hours to tell the story as he had written it in the book.

But, first things first: he needed the rights back, and given that, over the years, he’d taken every opportunity to publicly criticize the 1980 film—especially the portrayal of the main character by Jack Nicholson—the Kubrick camp was not inclined to be so cooperative. They made King agree in writing that he would stop all of his public bitching about the film version.

NO LEERING LOONY, NO WIMPY WIFE

The mini-series, now called Stephen King’s The Shining, first ran on ABC in the spring of 1997. King, who had a cameo role as the band leader, chose actor Steven Weber to play Jack Torrance. Weber, at the time finishing an eight-year run on the popular TV show, Wings, looked far more ordinary and affable than the first screen Jack, which made his slow descent into madness all the more believable—and effective. 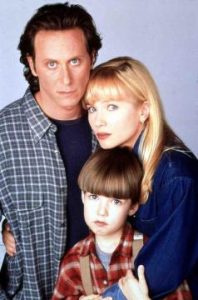 Does the Torrance family seem excited about Jack’s winter job?

I mentioned last week that Shelley Duvall’s performance as wimpy wife Wendy Torrance was one of the most glaring differences between the way King visualized her and how Kubrick wanted her portrayed. For the part in the mini-series King chose Rebecca De Mornay, whose breakthrough screen role over a decade earlier was opposite a young Tom Cruise in Risky Business. As in the book, Wendy is the glue that holds this family together. She is a strong woman, and she loves Jack, though he pretty much knows that he better not screw up again.

I offered a brief synopsis of the novel in Part One, and since the mini-series is essentially the same, there is no need to go over it again. With a few minor exceptions, King managed to get everything from his book into the teleplay. He also had most of the interior and exterior shots of the fictional Overlook Hotel filmed at the real Stanley Hotel, his inspiration for the story in the first place. 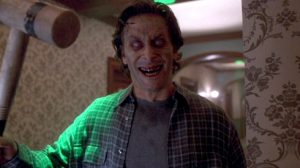 The Overlook Hotel is starting to get to Jack.

But I would like to mention one outstanding plot point from both the novel and the mini-series, which Kubrick inexplicably omitted. When Jack climbs up on the roof of the Overlook to replace some shingles, he comes across a large wasps’ nest. He fumigates the darn thing, seemingly killing all of the pesky critters, and he gives Danny the empty nest. The kid is thrilled—until later that evening, when live wasps pour out and start stinging everyone. First, the hotel has begun to do its supernatural thing, and second, it causes doubt to resurface in Wendy about Jack’s treatment of their son. Once, while drunk, he had “accidently” broken Danny’s arm.

Stephen King’s The Shining impressed fans and critics alike. One reviewer called it “the most frightening TV movie ever made.” Another, commenting on its four-and-a-half hour length, said that it used “every minute to paint a picture of surprising emotional complexity and depth.” It won two Primetime Emmy Awards and two Saturn Awards, including Best Genre TV Actor for Steven Weber. If you’ve only seen the Kubrick version, give this one a try.

WHAT HAPPENED TO DANNY TORRANCE?

After finishing a good novel have you ever wondered what happened to the characters that you’ve come to love or hate? Unless the book has a sequel, you’re out of luck. And The Shining never had a sequel, until Stephen King started toying with the idea about seven years ago. From there, Doctor Sleep was born. 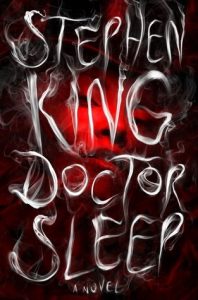 King actually polled his fans to see which project he should tackle first: a sequel to The Shining, or the next Dark Tower novel. Doctor Sleep won—by a thin margin. Prior to its release early in 2013, King described the story as “a return to balls-to-the-wall, keep-the-lights-on horror.” I concur; Doctor Sleep is one of the best novels I’ve read—actually devoured—in years.

I’m not going to present a full synopsis of the story here. What I’ll do is show how, at the start, it immediately links to the conclusion of The Shining. I’ll then offer the three key elements of Doctor Sleep, let you think about how King is going to weave them together, and leave it at that.

In the prologue Wendy Torrance is recovering from the physical injuries sustained at the Overlook Hotel, while a traumatized Danny continues to be haunted by its ghosts, specifically the specter from Room 217. They want to absorb his “shining” abilities. His friend and mentor, Dick Hallorann, helps him create lockboxes in his mind to contain the spirits.

Like father, like son. As an adult in his forties, Dan Torrance is an angry alcoholic who aimlessly wanders around the eastern half of the country. His psychic abilities have been minimized by his drinking. Finally settling in a small New Hampshire town, he admits that he needs help and begins the road to recovery. He works at a hospice, and as his powers begin to return he is able to assist dying patients in passing peacefully. This earns him the nickname of Doctor Sleep.

A few towns away, a girl named Abra Stone is born. Her “shining” abilities will, in short order, far surpass the youthful Danny’s powers. While growing up she will make telepathic contact with Dan Torrance, though neither will understand why for quite some time. 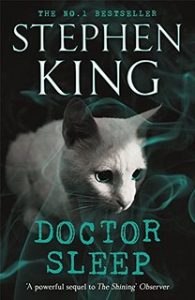 The third, and most terrifying, element of this story comes in the form of the True Knot, a group described as psychic vampires or quasi-immortals. While they appear middle-aged or elderly, most are centuries old. They feed off the essence, or “steam,” of people who possess some degree of the shining, sucking this life force from them as they die in pain. A woman named Rose the Hat is their leader, and one of King’s horror masterpieces. If a person has the shining, Rose will sense it, even across a great distance.

For about half the year the True Knot travels around the country in ordinary house trailers and campers, staying at campgrounds as they search for new victims. During warmer weather they live at their own campground in the Rockies—located on the site of the former Overlook Hotel…

Need I say more? Whether this is the final chapter or not of The Shining, it’s a damn good chapter. Check it out. 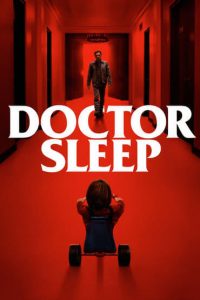 The 2019 film adaptation of Doctor Sleep, though much anticipated by King’s legion of fans, did not do all that well at the box office. It offered a solid cast, with Ewan McGregor as Dan Torrance and, in a splendid performance, Rebecca Ferguson as Rose the Hat. She just oozed evil.

But my issue, and possibly that of others, had to do with director/writer Mike Flanagan’s goal to have elements of the film link with both King’s novel and Kubrick’s movie version. For me, that kind of muddied the water. I was okay with some of the flashbacks—the creepy little girls in the hallway, the blood from the elevator, the corpse in room 217—but overall it seemed that the film was not sure what it wanted itself to be, if that makes sense. The ending was especially jarring, and if you’re an aficionado of The Shining universe you’ll know what I mean. 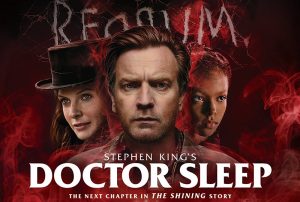 That said, I did enjoy the film, especially Ferguson’s tour de force performance as one of King’s most chilling creations, and McGregor’s heartwarming role as a man who, overcoming his own demons, is able to help the terminally ill not fear death as they pass on peacefully—with the help of a cat, of course. I’m not sure where King will take his remarkable saga from here—if he plans on taking it anywhere at all. As usual, only time will tell.