“And those who were seen dancing were thought to be insane by those who could not hear the music.” – Friedrich Nietzsche 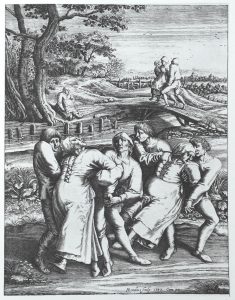 An engraving of three women affected by the plague.

Over the years I’ve written about many weird occurrences, but this particular one ranks way high on the Weird-O-Meter, I kid you not. It is called, among other names, the Dancing Plague of 1518.

NOT EXACTLY A DISCO PARTY

The incident took place in Strasbourg, which at that time was part of the Holy Roman Empire. On a July day a woman walked out into the street and began dancing wildly to music that only she could hear. She continued whirling for the better part of a week, and by that time she had been joined by dozens of other dancers. Within a month that number had swelled to four hundred. Nearly all of the participants were women and girls.

It wasn’t long before the non-stop dancing began to take its toll. At its height about fifteen people a day died from exhaustion. The final toll over the two-month period may have been in the hundreds. Sheer exhaustion brought about heart attacks and strokes.

Those in authority at the time called upon physicians for an answer. No, they said, the cause wasn’t supernatural, or even astrological, but more like a natural disease. “Hot blood” is what they called it. (Sounds like the title of a Donna Summer song.) Maybe “bleeding” the dancers would cure them. (Yuck!) 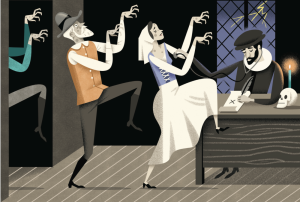 The authorities disagreed, stating that the best way for the dancers to recover was to just keep on dancing day and night until the fever in their blood had subsided. To help them along they had a stage built in the center of town and brought in musicians to help the dancers keep moving. (I’m not making this up!) And so the strange “party” continued through much of the summer.

Finally, in September, those who remained on their feet were carted off to a holy shrine in the mountains, where they prayed for absolution. The Dancing Plague of 1518 had ended.

WHY DID THEY DO IT? 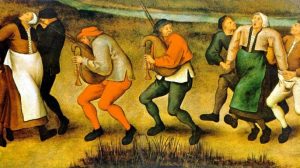 Musicians were added to the dance “party.”

Historians point to St. Vitus, a Catholic saint who many believed had the power to curse people with this dancing sickness. Starvation and other diseases already plagued much of Europe, especially this Alsace region, in the 16th century, so the superstition of the people may have been enough to create this hysteria. To that end, a number of similar incidents were reported in the region at about the same time, though none as widespread as what occurred in Strasbourg.

Other theories ranged from the dancers being members of a religious cult to the ingestion of a fungus called ergot. This fungus, which showed up on grains in the wheat family, was similar to lysergic acid diethylamide—commonly known as LSD. Yeah, that would cause them to trip out—ya think?

Let us all hope that, in the future, we’re dancing in the streets for better reasons.