Since it first ran in 2016, this has been one of the most viewed posts on my blog.

Who knew? Until I saw a film titled The Forest earlier this year, I had not heard of Aokigahara. Research revealed something shocking: this vast forest, located near the base of Japan’s sacred Mt. Fuji, is a place where thousands of people have come to take their own lives. Even more shocking: their spirits, the yūrei, continue to haunt the Sea of Trees. 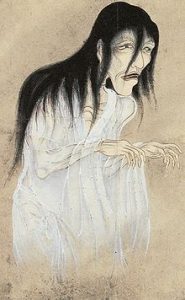 Here in the west we call them ghosts. To the Japanese they are the yūrei, loosely translated to mean “dim spirit.” As in the beliefs of most cultures, they are thought to be spirits that have been prevented from moving on to a peaceful afterlife.

The Japanese believe that everyone has a soul, or reikon. When someone dies the reikon leaves the body and awaits the proper burial rites to be performed. Once done, it can join its ancestors and become a protector of the surviving family. The reikon returns once a year during the Obon Festival for the family to offer its appreciation.

But all bets are off if the person meets a violent or unexpected death such as murder or suicide. The reikon then becomes a yūrei and can return to the physical world. The transformation is driven by strong emotions such as vengeance, hate, or sorrow. Now the yūrei hangs around on this plane until the emotions that keep it tied here are resolved, and/or the proper burial rituals are performed. The most vengeful of the yūrei are called onryō and are the hardest to satisfy. 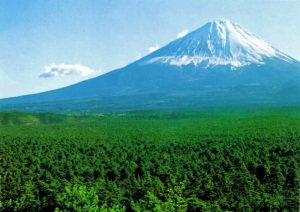 Aokigahara, also called the Suicide Forest or the Sea of Trees, covers nearly fourteen square miles near the northwest base of Mt. Fuji. Its latter nickname is derived from what it appears to be when looking down from the mountain. Aokigahara is so dense that all outside noises are indistinguishable. It is said that one’s own breathing sounds like an oncoming freight train. Its few “official” trails lead tourists to attractions such as its ice caves, but otherwise there is not a great deal to see in this claustrophobic woodland. Hikers who leave the trails use colorful plastic tape to avoid getting lost. Coming across crime scene tape in the middle of your hike can be most disconcerting.

But above all else, Aokigahara is the most “popular” suicide site in Japan, and arguably the world. Japan in general has a notoriously high suicide rate, and for centuries despondent people have journeyed to Aokigahara with no intention of coming back. The most common methods used in the forest are hanging and drug overdose. 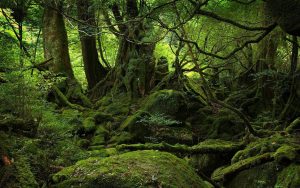 The Suicide Forest is rather dense.

Statistics from the distant past are vague, but the forest’s modern era can be dated from 1960 with the publication of a novel titled Kuroi Jukai (Black Sea of Trees), by Seichō Matsumoto, which romanticized the site. Estimates range from thirty to one hundred successful suicides each year, though often bodies are not discovered for a long time, if at all. In 2010 over two hundred people attempted suicide in Aokigahara, more than a quarter of them successfully. The government has posted signs with helpline numbers at all entrances to the forest, for what little good it does. Officials also hold routine body searches with the help of volunteers.

With all of this death in such an eerie location, is it any wonder that the yūrei, the angry ghosts, thrive in the Sea of Trees? I don’t think Aokigahara will be added to my bucket list any time soon. 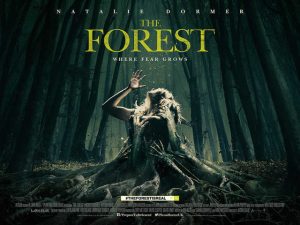 STAY ON THE PATH

Aokigahara is prevalent in pop culture. References appear in anime and manga, in literature and games, and—of course—films, the medium in which I first learned about it. Keanu Reeves’ character was raised by a race of demons in Aokigahara (47 Ronin, 2013). A woman enters the forest to search for the body of her mother in Grave Halloween (2013). A recent film, The Sea of Trees, stars Matthew McConaughey, Naomi Watts, and Ken Watanabe. I understand it bombed, but with a cast like that I’ll definitely check it out when it is released on DVD. (I did, and it is quite a compelling film. Check out my post, “A Journey Into The Sea Of Trees.”)

But as mentioned, the one that got me curious about Aokigahara was the 2016 thriller, The Forest, starring Natalie Dormer (Game of Thrones) as twin sisters Sara and Jess Price. Here is a brief synopsis, with no spoiler alert. 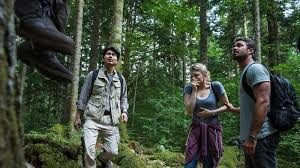 Michi shows Sara and Aiden one of the forest’s highlights…

With the tagline, “Stay on the Path,” the film opens with Sara, an American, receiving a call from a Japanese official. Her troubled sister, Jess, was seen entering Aokigahara and is now presumed dead. Sara travels to Japan and takes a room at the small hotel where Jess had stayed. It is near the forest entrance.

Sara meets a journalist named Aiden, and she tells him that as a child Jess had witnessed their parents’ deaths in a car accident, which Sara had not, and since then Jess had always been the headstrong one. We see the twins interact in a number of flashbacks.

Aiden, who wants to write a story about Sara’s quest for her sister, says that he’ll go with her into Aokigahara, and he enlists the help of a park guide named Michi. The guide believes that Jess is dead, but Sara says that, as a twin, she would know, and she is certain that Jess is alive. They trek deep into the seriously creepy forest, and late in the day they find Jess’s tent, but not Jess. Michi tells her to leave a note so that they can head back to the hotel before dark. Sara insists on staying. Aiden volunteers to stay with her.

During the night, Sara hears a noise and, thinking it is Jess, rushes into the woods. Nope, not Jess, but a young schoolgirl named Hochiko, who says that she knows Sara’s sister. She also warns Sara not to trust Aiden as she runs off. Sara is unable to follow her. 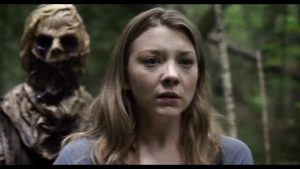 Sara’s day is about to get worse.

The next morning, Sara and Aiden continue their search but soon become lost. Sara begins to doubt Aiden’s motives, and she insists on looking at his cellphone, where she finds a photo of Jess. Aiden had said that he’d never met Jess, and now he insists that he has no idea how the photo wound up on his phone.

Sara runs off alone, and with all kinds of weird stuff going on around her, including bodies hanging from trees, she stumbles and plummets into an underground cave. When she comes to she runs into sweet little Hochiko, who reveals herself as one of the yūrei and scares the crap out of Sara when she assumes her demon form. Off she runs again, soon to be rescued—by Aiden, of course.

While looking for Sara, Aiden had come across an old ranger station, and now he takes Sara there. It is inside this seriously creepy building that more weird stuff happens, and this is also where I’ll leave you. Suffice to say that our charming little yūrei has led Sara off the path, both literally and figuratively.

The Forest is neither the best nor the worst horror movie I’ve ever seen. But I’m glad that I came across it, if for no other reason than introducing me to Aokigahara, the Suicide Forest.