An evil doll that preceded Chucky? Indeed—and this one was real. This post first ran in 2014. 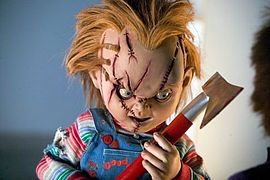 Chucky may be Robert the Doll’s descendant.

Chucky, of course, is the murdering Good Guy doll—possessed via voodoo by the spirit of serial killer Charles Lee Ray—who “stars” in the Child’s Play franchise, at last count seven movies. He probably never met his ancestor, but the DNA is undeniable.

The story of Robert the Doll begins in 1898 with the construction of a large, brooding house in Key West, Florida. Later known as the Artist House, the place was owned by Mr. & Mrs. Thomas Otto. Though well off, the Ottos were mean to their servants. In 1906 one of those servants, a young Bahamian girl, well versed in voodoo and the dark arts, had enough of the mistreatment and quit. But she presented the Ottos’ young son, Robert Eugene Otto, with a “gift”—a three-foot-tall straw doll in a sailor suit. The boy, called “Gene” by his parents, gave the doll his little-used first name, and throughout much of his childhood he seldom let Robert out of his sight. 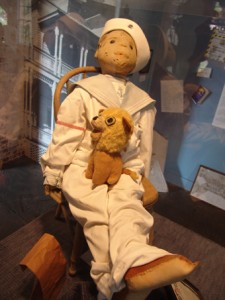 From then on, misfortune seemed to haunt the Ottos. At the least, they would overhear long conversations between Gene and Robert, which they initially guessed was their son talking in two voices. Later on, they were convinced that the doll was actually talking, partly because they swore that on a number of occasions they witnessed Robert running from room to room or up and down stairs. They also heard Robert laughing, and moving about on the upper floor when everyone was downstairs. Neighbors swore they saw Robert darting from one window to another when the family was not at home.

This went on even after the Ottos put Robert in the attic. During the night they would hear young Gene screaming. Rushing into his room they would find furniture knocked over, the doll sitting at the foot of Gene’s bed, and the boy insisting that “Robert did it!” The Ottos lost many friends, all of whom were too frightened to enter their house, given the unsettling noises that emanated from upstairs.

Robert Eugene Otto, who as an adult would find some notoriety as an artist and writer, inherited the house after his parents died. Even then, the doll maintained a hold on him. Now married, Gene rescued Robert from the attic, but the doll weirded out Anne, his wife, who swore she could see its facial expressions change. She wanted it back in the attic, but Gene insisted that Robert needed a room of his own, an upstairs turret-room. 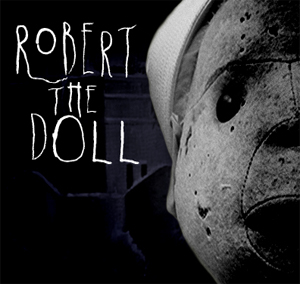 Gene Otto died in the early 1970s, and another family with a ten-year-old girl moved into the Artist House. At first delighted to discover a tattered straw doll in the attic, the girl soon discovered that she had entered a living hell. Robert moved around her room menacing her, sometimes attacking and even torturing her. Many a night she awakened her parents with her screams. Decades later she still maintains that everything she experienced was true, that the doll wanted to kill her.

These days you’ll find Robert the Doll residing at the Fort East Martello Museum in Key West, and he’s well-guarded. Visitors can take his picture, but for some reason many cameras seem to malfunction when they try. Staffers and security guards report all manner of strange incidents in and around Robert’s display case. 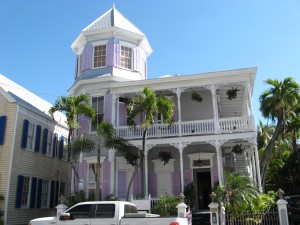 The Artist House eventually became a bed and breakfast, as well as a historical site for those interested in hauntings. The turret-room and attic are both available for overnight visits, and many who stay there tell of footsteps, voices, and other weird things. Some believe that this is the spirit of Anne, watching over visitors and making sure that Robert doesn’t return.