Wow, has it been four years since Gene Wilder left us? I first presented this post in 2016. Gene left behind a great legacy of humor in his many films. Here is a small sampling of his best lines.

“I’m in pain and I’m wet and I’m still hysterical!” 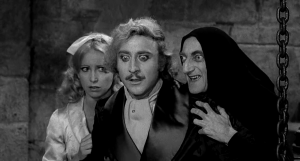 Dr. Frankenstein, with Inga and Igor.

“Are you saying that I put an abnormal brain into a seven-and-a-half foot long, fifty-four inch wide GORILLA?”

(To a class of med students) “My grandfather’s work was doodoo! I am not interested in death! The only thing that concerns me is the preservation of life!”

“Well, it got so that every piss-ant prairie punk who thought he could shoot a gun would ride into town to try out the Waco Kid. I must have killed more men than Cecil B. DeMille.”

(To Sheriff Bart, a black man, after being caught in KKK robes) “Why, Rhett! How many times have I told you to wash up after weekly cross burning?”

WILLY WONKA AND THE CHOCOLATE FACTORY (As the title character, arguably his most beloved role.) 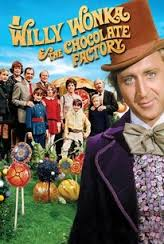 “So much time and so little to do. Wait a minute. Strike that. Reverse it. Thank you.”

“A little nonsense now and then is relished by the wisest men.”

“If the good Lord had intended us to walk, he wouldn’t have invented roller skates.”

(After Mike Teevee shrinks to a few inches) “Well, fortunately, small boys are extremely springy and elastic. So I think we’ll put him in my special taffy-pulling machine. That should do the trick.”

“Rainbow drops. Suck them and you can spit in seven different colors!”

“There is no life I know to compare with pure imagination. Living there, you’ll be free if you truly wish to be.”

“I don’t understand it. The children are disappearing like rabbits. Well, we still have each other. Shall we press on?”

SILVER STREAK (As George, a book editor who sees a dead guy thrown from a train; co-starring with Richard Pryor.)

“You stupid, ignorant son of a bitch, dumb bastard. Jesus Christ. I’ve met some dumb bastards in my time, but you outdo them all.”

“If there’s ever anything that you need…don’t call me.” 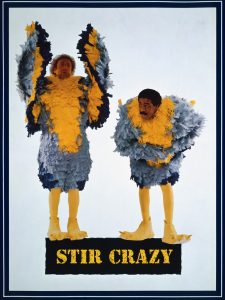 STIR CRAZY (As Skip, who is framed for a bank robbery, along with Richard Pryor.)

“This filthy, roach-ridden reality is inspiring…what did that second policeman say to you when he grabbed you by the throat?”

“I want a bigger cell! With better ventilation!”

HAUNTED HONEYMOON (As Larry, a speaker on horror radio shows, who takes his fiancé Vickie—Gilda Radner—home to meet his weird family in the castle where he grew up.)

“Something terrible has happened! I just found cousin Francis in my bed!”

“Now you think this would frighten me. Well it doesn’t. Because I know this is just a filthy figment of my diseased imagination. All I have to do is simply reach out my hand and touch it!”

SEE NO EVIL, HEAR NO EVIL (As Dave, a deaf man, to Richard Pryor’s blind man.)

“Today I threatened to shoot a naked woman with my erection.”

“And then one day, my wife turned into this remarkable creature that could sit on the end of a broomstick and take off. She could actually achieve flight.”

THE FRISCO KID (As Rabbi Avram, traveling to his new congregation in California in 1850 with outlaw Tommy—Harrison Ford. I crack up just thinking about this film.) 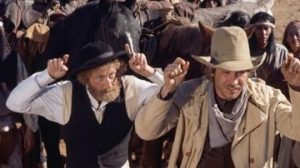 Rabbi Avram and the Frisco Kid make some new friends.

(Chasing a chicken) “Come here, wait! I don’t want to hurt you! I just want to make you kosher!”

(Teaching Native Americans how Jews dance) “Watch that lady. I think that lady’s a Jewish Indian.”

“I’ve crossed rivers, and I’ve climbed high mountains, and I’ve…I was captured by wonderful Indians. I did so many things. God has truly blessed me. And what’s more, how many rabbis can say that they had a bank robber for a best man?”