I get the willies just thinking about some of the psychos created by author Thomas Harris. This post first ran in 2016. 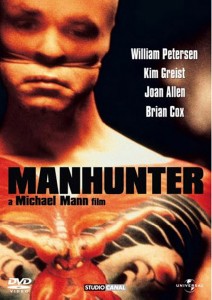 Most people think of Anthony Hopkins when they hear the name Hannibal Lecter, and rightfully so. Hopkins won an Academy Award for portraying the incarcerated psychiatrist/serial killer in the Best Picture of 1991, Silence of the Lambs, and two subsequent films. But he wasn’t the first.

The 1986 thriller, Manhunter, was based on Thomas Harris’s outstanding 1981 novel, Red Dragon, a prequel to Silence of the Lambs. It starred William Petersen (CSI) as FBI agent and profiler Will Graham and, in a relatively small role, fine actor Brian Cox as Hannibal Lecter (spelled “Lecktor” in the credits). Another film version, this time titled Red Dragon and starring Hopkins as Lecter, came out in 2002. Manhunter, which I thought to be an excellent film, bombed at the box office and was not well received by critics, though it gained traction through the years and now holds a “94% fresh” rating on Rotten Tomatoes.

One last word about the novel: it is among my favorites, and I’ve read it a number of times. I even rate it above Silence of the Lambs, and that’s saying something. It is a well-paced, gripping story, with a powerful backstory (absent from the movie) that can make readers shudder. 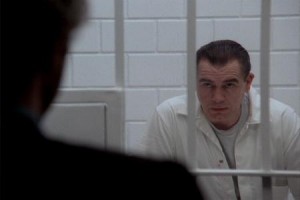 IT’S JUST YOU AND ME, SPORT…

Having captured Hannibal Lecktor years earlier but injured both physically and mentally, Will Graham has retired from the FBI and leads a quiet life in Florida with his wife and young son. His former boss, Jack Crawford, shows up to seek his help. A serial killer dubbed the Tooth Fairy has murdered two families, both during a full moon. Graham reluctantly agrees to help, as long as he can stay in the background.

But his anonymity does not last long. Needing to recover a serial killer’s mindset, Graham calls upon Lecktor for insight. Their confrontations make for some great scenes. An obnoxious reporter for a sleazy tabloid, Freddy Lounds, lets the public—including the Tooth Fairy—know that Graham is back on the job. Lecktor and the killer, a nutjob named Francis Dollarhyde, even begin communicating through the personal ads in the tabloid. Lecktor gives Dollarhyde Graham’s home address with an exhortation to “Save yourself, kill them all.” His wife and son are moved to a safe house.

Freddy Lounds is treated poorly by the Tooth Fairy.

Graham and Crawford decide to use Lounds to write a derogatory story about the Tooth Fairy in an attempt to draw him out. Bad idea: the pissed-off Dollarhyde kidnaps Lounds, bites out his tongue, sets him ablaze and rolls him into the tabloid’s parking structure in a wheelchair.

Dollarhyde works at a film lab in St. Louis that develops 8mm home movies from all over the country. This was how he chose the first two families that he murdered. One day he encounters blind, gentle co-worker Reba McClane and offers her a ride home. A relationship ensues, and his desire to kill is briefly suppressed.

One evening he takes Reba to his (creepy) house, and she sits on the couch next to him as he watches a home movie of the next family that he planned to murder. Reba comes on to him; they make love, and she spends the night there.

SPOILER ALERT: Graham has been trying to discover a link between the two murdered families. Utilizing some of what he heard from Hannibal Lecktor, he realizes that the killer learned things about the families and the layout of their houses from watching their home movies. Both were developed at the lab in St. Louis. He and Crawford rush there. 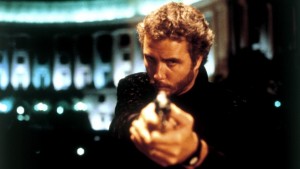 Graham had not planned on becoming this involved.

Dollarhyde, now smitten with Reba, sees her with another co-worker and goes off the deep end. He kills the guy and drags Reba back to his house. In an awesome scene, Iron Butterfly’s “In-A-Gadda-Da-Vida” plays in the background as the terrified Reba staggers around the weird place. Graham and the posse arrive in the nick of time, but Dollarhyde manages to kill some deputies and wound Graham before he is brought down. Graham, probably thinking, “Screw this, I’ve had it,” returns to his quiet life in Florida.

This ending, by the way, differed from both the novel and the 2002 film. In each, Reba believes that Dollarhyde killed himself, considering that she got splattered with blood, and that his body was supposedly burned beyond recognition after a fire that he set destroys the house. (Another victim suffered that fate.) After Graham returns home, Dollarhyde shows up and menaces the family, further injuring Graham severely. He is killed by Graham’s wife.

No matter; whether you read the novel, watch the 2002 film version, or the excellent Manhunter, directed by Michael Mann, you’re in for a rollercoaster ride of a psychological thriller.