This post is about one of the best movie remakes of all time. It first ran in 2016.

With so many folks pissed off about the remake of Ghostbusters, I got to thinking: has anyone ever referred to the remake of any much-loved movie as outstanding? More than likely the response is “meh” or “why bother?” or “what the heck were they thinking?” Did we really need remakes of Psycho, or Clash of the Titans, or Poltergeist, or Willie Wonka and the Chocolate Factory, or…well, I’m sure you can come up with your own list. 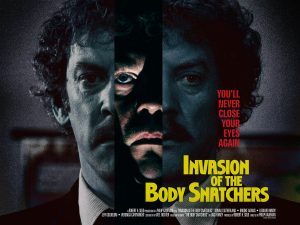 But there is a particular remake that many film buffs consider one of the—if not THE—best ever. I’m talking about the 1978 science fiction/horror gem, Invasion of the Body Snatchers.

Before this film was even conceived, the 1956 version of Invasion of the Body Snatchers was already a classic. (See my post, “They’re Here Already!”) Subtly terrifying, the well-acted movie played on the fears of the day: invaders from other worlds, and the threat of communism robbing people of their individuality. So what did the remake do to earn its accolades and, even to this day, carry a nearly perfect rating on Rotten Tomatoes?

For starters, the film boasted an outstanding cast. It starred Donald Sutherland and Brooke Adams, with strong support from Jeff Goldblum, Veronica Cartwright, and…Leonard Nimoy! Without trying to be too imitative, it expanded upon themes introduced in the original. And, given that twenty-two years had elapsed, during which special effects and makeup had greatly improved, many of the horrific scenes caused viewers to cover their eyes. The film still appears on many “Scariest Movies of All Time” lists.

To link the two movies the star of the 1956 version, Kevin McCarthy, has a cameo as “Running Man,” a wild-eyed old-timer who darts through the streets shouting a warning similar to his, “They’re here already!” He is then hit and killed by a car as an emotionless crowd looks on. Later, the director of the original, Don Siegel, appears as a cab driver. 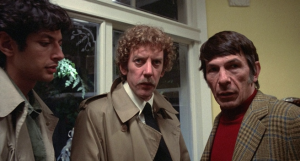 The basic storyline, drawn from Jack Finney’s novel, The Body Snatchers, remains the same. In this version we actually see the spoors drifting through space, landing on our world—specifically, San Francisco—and sprouting small flowers. Elizabeth Driscoll (Adams), who works for the Department of Public Health, brings one of the flowers home and puts it in water on a nightstand. The next morning her boyfriend is acting kind of weird. Yep, he’s one of the pod people. Elizabeth watches from the window as he dumps a trash can full of something into a waiting garbage truck—the remains of the real boyfriend. We never did see what happened to the dead bodies in the original.

Elizabeth’s boss, Matthew Bennell (Sutherland), starts encountering people swearing that their wives are not their wives, or fathers, etc. His friend, psychiatrist David Kibner (Nimoy), tries to convince everyone, including Elizabeth, that they are delusional. He, of course, is one of the pod people. Matthew’s friends, Jack and Nancy Bellicec (Goldblum, Cartwright) find a partly formed body in their bathhouse, one that looks a lot like Jack. The body disappears before authorities arrive, as does the one near a sleeping Elizabeth, Matthew having broken into her house and carried her out. These scenes mirror the original.

THE STREETS OF SAN FRANCISCO 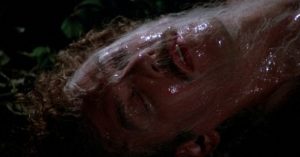 The 1956 film took place in a small, fictional town near Los Angeles. Since the setting here is San Francisco, and since the alien takeover happens so swiftly to so many, the effect is truly frightening. That said, from the point in the story where Matthew, Elizabeth, and the Bellicecs are targeted by the pod people all the way till the end, the result is a non-stop rush of pure terror.

It begins when the four of them, believing themselves safe in Matthew’s home (they’re not; Kibner knows where they are), settle in for some much-needed rest. Matthew reclines on his patio, determined to keep watch, but of course he falls asleep, and this is when all of the duplications and transformations take place. We want to scream for him to wake up during a drawn-out scene as the horrid thing in the pod begins to look more and more like him, its creepy tendrils snaking up him and transferring his essence. Fortunately he is awakened by the others, and almost instantly they are being pursued through the streets by numerous pod people. Jack and Nancy, in a brave act, divert the crowd from Matthew and Elizabeth.

Matthew and Elizabeth attempt to hide at their Health Department lab but are discovered by Kibner’s double and other pod people. He/it explains that this takeover by the alien species is about survival, and that the aliens are performing a service by ridding humans of all emotions. Matthew and Elizabeth, who by this time realize that they’ve loved each other for some time, don’t see it that way; they overpower their captors and escape. 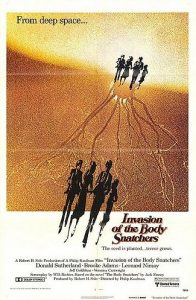 Ultimately, they make their way to a large warehouse on the waterfront, where countless pods are being grown and trucked out. While Elizabeth waits outside, Matthew explores the seriously creepy building. Believing that their only way out might be aboard a ship, he makes his way to the docks—where a vessel is being loaded with hundreds of pods. The pod people are going international.

I’m going to stop here, in case you’ve never seen this film, or haven’t viewed it for a long time. There are only a few minutes left till the end, but those minutes contain two of the scariest, most shocking scenes in all of sci-fi/horror filmdom, I kid you not.

The original version of Invasion of the Body Snatchers premiered in 1956, and after the censors viewed it, a prologue and epilogue were added. Why? Back then, films could not end on what could be perceived as a negative note. I will only say this about its excellent 1978 namesake: it was not constrained by such an edict.