I presented this post in 2018, and when I recently checked, nothing had changed. This film was a box-office bomb. 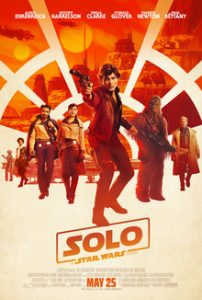 I don’t get it; I just don’t. Solo: A Star Wars Story, the second spinoff after Rogue One, has been around over a month—long enough for it to be considered a box office bomb. Jacqueline and I totally enjoyed the film, and from what I learned, so did critics and audiences alike. But as of this writing Solo had grossed “only” $356 million, and word is that it needed to pull in $500 million just to break even. Given the prior box office power of the franchise—heck, even the much-maligned Phantom Menace grossed over a billion dollars—this has been quite a shocker.

The first thing I thought of a while back when I heard that they were making a film about a young Han Solo was, how can they do that without Harrison Ford? Without a doubt he IS Han Solo, but the fact is that he’ll be turning seventy-six this month means that he can’t play a teen or young adult, regardless of the wonders of technology and makeup. This stuck in my craw for a while, and I’m sure it affected many Star Wars fans in the same way. But is that enough of a reason to shun the film? Guess so…though I’m glad that we went to see it.

The actor chosen for the role was Alden Ehrenreich, and my first response to that—yours too, most likely—was WHO? Though his film credits were not extensive, he had a breakthrough role in the Coen Brothers’ film, Hail Caesar. He was also coached by Harrison Ford himself, but just enough to not be doing an imitation or parody of the role. To tell the truth, once I got over my issue about Han not being played by Ford, I thought this young man did a heck of a job. 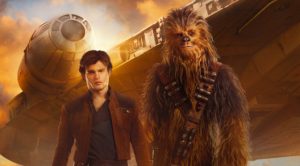 While the actors may be different—even Chewbacca has someone else inside the suit—many of the scenarios should resonate with Star Wars fans. For example, Han Solo’s name was simply “Han” until he joined the Imperial Navy. When asked for his surname he says that he has none, that he is alone, with no family. At that point the recruiting guy gives him the surname of “Solo.”

And speaking of Chewbacca, his loyal sidekick: three years after joining the fleet Han is falsely accused of desertion and thrown into a pit with a crazed Wookiee bent on killing him. Yep, it is Chewie, and after escaping together they become fast friends.

Princess Leia once called Han a scoundrel. His role model is a man named Tobias Beckett, played by the ubiquitous Woody Harrelson, whose gang he joins. 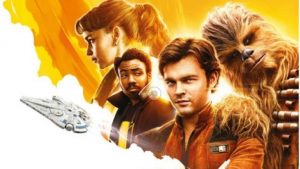 And what about the Millennium Falcon, his famous rust bucket of a ship? Ultimately he will win it in a game of chance from Lando Calrissian (Donald Glover, who was coached by Billy Dee Williams). We’ll also experience him using the ship to “make the Kessel run in under twelve parsecs,” based on a comment Han made in the original 1977 film. This is one of the most exciting scenes in the movie—one of many.

Finally, Han and Chewie head out to a planet called Tatooine, where a big-time gangster (yes, Jabba the Hutt) is looking for someone to help him pull off a big job. Wow, I would sure like to experience that!

And we would have, since sequels were planned just for Solo. But with Disney now poised to lose millions on the film, any sequels to Solo—and for that matter, the whole spinoff universe—are up in the air. What a shame. Has one of the most successful franchises in Hollywood history finally run its course? Stay tuned…