Throwback Thursday: “I Can’t Wait Till”…Oh Yes I Can

Why wish TIME away? It moves pretty damn fast on its own. This post first ran in 2015. 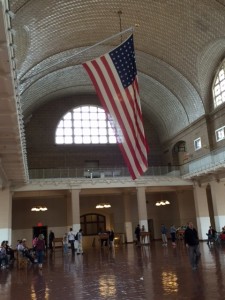 Ellis Island in New York Harbor: we saw the Baggage Room that my parents passed through as immigrants over a century ago.

File this post under the heading of “Old-Guy-Wisdom-Formulated-By-Being-Around-So-Damn-Long” and take it for what it’s worth, or leave it. There are two phrases that you—and I—have doubtless used every day of our lives from the time we were little kids. They are: “I’m looking forward to ____” and “I can’t wait till____.” (Fill in the blanks.) Am I right? We may even use one or both multiple times a day.

Let me restate one thing: I used those lines most every day of my life—until about a year ago. Then, other than an occasional slip, I stopped using both of them. So what happened? Well, it started with a refrigerator magnet…

The magnet in question turned out to be a calendar highlighting September 2015, with the heading of “Save the Date” and one particular Sunday prominently marked. The daughter of my wonderful cousin Bernice, a Long Islander, would be married on that day, and they hoped that family from all over the country could make it to New York.

Well heck, count us in! My bride and I hardly needed an excuse to visit the Big Apple. Family, Broadway musicals, baseball, sightseeing…food! We stuck the magnet on the fridge, both of us proclaiming that we were really looking forward to the trip back east. 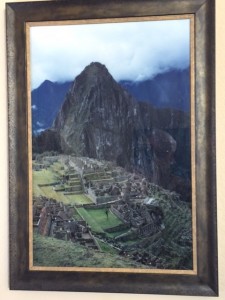 I took this shot of Peru’s awesome Machu Picchu.

THE DAYS COME AND GO

But seeing that magnet every day, as I would for the better part of a year, I got to thinking (a scary proposition). By “looking forward” to something, or “not being able to wait” for something, wasn’t I hoping that the days/weeks/months until that time would pass by quickly? Was that what I really wanted? No way.

Both my bride and I have had our share of serious health issues through the years. We’ve also lost family members and good friends, most not much older than us, some even younger. Because of this, we have come to cherish every day that we have and not “look forward” to next month, next week, or even tomorrow. Why wish the in-between time away?

Jacqueline and I have taken some awesome trips: Peru, Greece, Iceland, etc. We so looked forward to seeing Peru; now that trip is twenty-one years in the rearview mirror. We couldn’t wait to see the glaciers of Iceland, and the islands in the Aegean Sea; both those trips are way more than a decade past. Everything comes, everything goes.

As a baseball junkie, I often go into withdrawal the day after the World Series ends. This year, the difference is that I won’t be counting down the days until pitchers and catchers report to Spring Training. I made that promise to my bride, and I’ve kept it. Besides, we’ll have over a hundred wonderful days to do lots of other things.

Last week I took the magnet that had been up there for nearly a year off the refrigerator. That excellent trip to New York was already a month (now four years) in the past.