This actor had lots of screen time…but was hardly ever seen. Say what? I first presented this post in 2019. 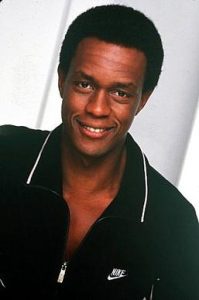 During his all-too-brief career—and life—actor Kevin Peter Hall was billed as “…the tallest man on stage and screen.” At over 7’2” the assessment was spot on. It also led to some memorable roles for this gentle giant from Pittsburgh.

Born in 1955, Hall was the tallest of seven brothers, the “shortest” being 6’5”. He starred on his high school basketball team and later did the same at George Washington University. His college major? Theatrical Arts. After college he played professionally in Venezuela.

But Hollywood beckoned, and in 1979 he was cast in his first role in the horror film, Prophecy, a clunker of a movie (I liked it, of course) in which he played Katahdin—a giant mutant bear. (I kid you not!) This would be the first of many such castings, although he also appeared as a “human” on both the big and small screens. For those of you who remember the television sitcom, Night Court, he played a mental patient in the 1985 “Nuts About Harry” episode. 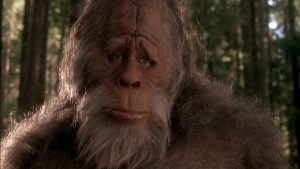 But without a doubt Hall’s two most iconic roles came in 1987, first as Harry, the friendly Sasquatch character in the popular comedy, Harry and the Hendersons, then as the Predator, the alien hunter in the sci-fi/horror classic of the same name, starring Arnold Schwarzenegger (and another soon-to-be governor, Jesse Ventura). Who can forget Arnie’s great line when the Predator removes its helmet and reveals its face? “You’re one ugly motherfucker!” Their mano a mano battle near the end (mano a alien?) is memorable. Hall even received some real face time as the helicopter pilot who flew Arnie out of the jungle. 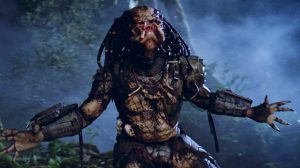 The alien hunter, a menacing presence.

Following more film and TV parts, including one in a 1989 episode of Star Trek: The Next Generation, Hall had a recurring role in the sitcom, 227. There, he met the actress, Alaina Reed, whom he married both on the show and in real life.

In 1990 Hall returned to his alien hunter role in Predator 2, this time opposite Danny Glover. This one took place in Los Angeles rather than a Central American jungle, and on the blood-and-gore meter it made the first Predator look like a G-rated Disney film. This time, when Hall’s helmet came off and Glover began repeating Arnie’s iconic line, the alien hunter (a voiceover) completed it by shouting “motherfucker!” (I don’t know, maybe it was DNA memory…) Hall also played the Elder Predator who appeared at the end. 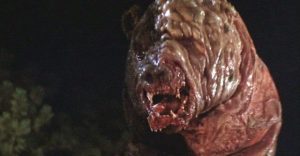 In 1991, given its popularity, Harry and the Hendersons came to the small screen. Hall reprised his role as Harry, the kindly Bigfoot living with an upwardly mobile family. The series would run for three seasons, but sadly, Hall would not be around for the last two. That year, Hall contracted HIV from a blood transfusion. He passed away in April from AIDS-related pneumonia, not long before his thirty-sixth birthday.

Kevin Peter Hall was a talented performer. Working from inside a suit, you would have to be. He brought great menace to the alien hunter in the Predator films, and a wonderful warmth to the Sasquatch named Harry. File his untimely death under the heading, “Life Sometimes Is Not Fair.”