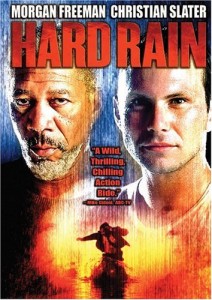 Until today, I hadn’t even begun talking about disaster movies—so many of which I enjoy. High on the list is the 1998 mini-gem, Hard Rain. Now I could’ve included this as a Guilty Pleasure, given its negative reviews and poor box office (though subsequent VHS and DVD sales made it profitable). Or for the same reasons I could have resorted to the bad joke, “This one really was a disaster!” Nope, none of the above.

With that tagline, the story opens in a small Indiana town ravaged by endless rainfall and a crummy dam that is threatening to give way. Sheriff Collins (Quaid) and his deputies are hustling people out of town, likely Collins’ last official act, having been voted out in a recent election. Armored car drivers Tom (Slater) and his old Uncle Charlie (Asner) are picking up money from the town’s bank vault for safekeeping. Including other stops they made, they’re carrying about $3 million. 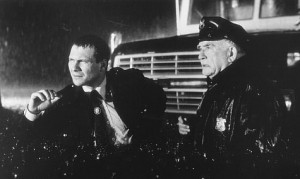 Tom and Charlie have bigger problems than the rain.

On their way out of town, Tom and Charlie are first stopped by rising flood waters, then confronted by a criminal named Jim (Freeman) and his three accomplices, one of whom kills Charlie. He didn’t know that the old man was part of the heist scheme. The honorable Tom flees with the money, which he hides in a (mostly underwater) cemetery. A boat/jet ski chase (way cool) ensues, and Tom escapes. He then takes refuge in a church, where restoration expert Karen (Driver), thinking he’s an intruder, knocks him senseless.

Tom awakens in the town jail cell, where he is questioned by Collins and two of his deputies, Wayne and Phil. After he tells them what has happened, Collins and Wayne head off to investigate, while nice-guy Phil, who has always had the hots for Karen, is ordered to take her out of town. Tom is left in the cell. Karen, who does not want to abandon her project, pushes Phil out of the boat and heads for the church.

Dam operator Hank is forced to open another levee because of the building pressure from the endless rain. The ensuing surge raises the water level in the town. Karen, realizing that Tom is trapped, returns to the jail and barely manages to get him out. They are confronted by one of the gang members, who is hanging onto a metal pole just as a transformer blows. Zzzzap, he’s fried.

Karen and Tom take refuge in the home of seniors Doreen (White) and Henry (Dysart), who refused to be evacuated. Tom borrows Henry’s boat in order to return to the armored car and call for help, but the vehicle is submerged and the radio is useless. He surfaces to find the bad guys holding the seniors hostage. (Karen managed to escape.) Tom bargains for their release by promising to show Jim where to find the money. 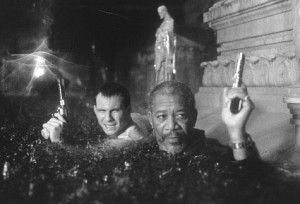 Tom and Jim are up to their necks in trouble.

But surprise, it’s gone—already picked up by Collins and his deputies, as well as Hank, who has come down from the dam. The sheriff, it turns out, is worse than Jim. They’ve also captured Karen. A shootout ensues, and Jim’s two goons are killed. Jim and Tom, now thrown together by fate, get away and hide out in the church.

Wayne, the sleazy deputy, takes Karen to her house, where he handcuffs her to a lower bannister. He plans to rape her before leaving her to drown when the water inevitably rises. She manages to stab the asshole, and he dies. (Yes!) But she cannot free herself.

Back at the church, things don’t look good for Tom and Jim against the heavily armed Collins and his men. As a mostly one-sided firefight ensues, and as Karen struggles desperately to break loose, the alarm up at the dam sounds, and a wall of water the size of Mount Doom roars toward the town. Oh crap…

No spoiler alert here. If you’ve not seen Hard Rain, and if this post has stirred your curiosity, you’ll want to totally enjoy the breathtaking conclusion. Screw the reviewers. I’ll watch this 97-minute action flick once a year until the Mother Ship arrives. Enjoy!