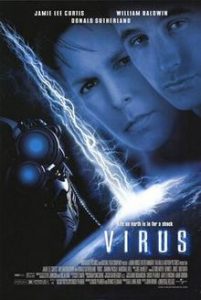 This virus came from a lot farther away than China. I first presented the post in 2017.

Jamie Lee Curtis once called Virus, a 1999 sci-fi/horror flick, a “piece of shit.” Why is that significant? Because the renowned scream queen was one of its stars—along with Donald Sutherland and William Baldwin.

The film, despite a lot of hype—even a line of action figures hit the stores back then—was a box-office bomb, and the reviews were brutal. The word “derivative” kept popping up in the latter. If you’ve seen the films Deep Rising or Ghost Ship, or any “Star Trek: Next Generation” episode with the Borg, you know what I mean.

Still, I get a kick out of Virus, especially Sutherland’s penchant for overacting. And I’m not alone, as the film has become somewhat of a cult classic. Here is a brief synopsis, with no spoiler alert.

A Russian “science vessel” (it’s also loaded with missiles) in the South Pacific is in touch with the Mir space station when a huge energy source hits the Mir and kills the astronauts. It is then beamed down to the ship, where it integrates with the main computer. As crewmembers start getting zapped, we cut to… 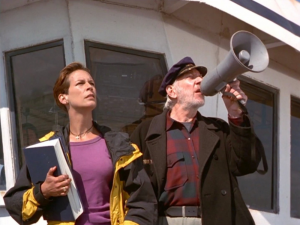 Everton hails the Russian ship as Foster looks on.

…a week later, where the salvage tugboat Sea Star under Capt. Everton (Sutherland) is hauling a lucrative cargo through a typhoon. Navigator Kelly Foster (Curtis) and engineer Steve Baker (Baldwin) warn that the cargo may pull them under, but Everton, broke and desperate for the payoff, won’t cut it loose. When it finally breaks free and sinks, he contemplates suicide.

By this time they’ve reached the eye of the typhoon, and in the becalmed water they come across the Russian vessel, which appears to be deserted. Everton, ignoring bloodstains, bullet holes, and other signs of chaos throughout the ship, sees an even bigger salvage, but Foster and Baker are dubious. What happened to 300 crewmembers?

THEY BROUGHT “IT” BACK TO LIFE

When Baker and a crewman named Squeaky restore power to the ship, they also bring the energy source from space back to life. “It” shows its appreciation by dropping an anchor on the Sea Star, sinking it and injuring another crewman. “It” also turns Squeaky into a Borg-like creature, part human, part machine. 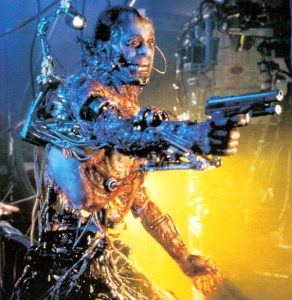 A rather nasty cyborg…

As Foster and the others treat the injured crewman in sick bay, a sole Russian survivor bursts out of her hiding place and fires on the crew but is quickly subdued. Nadia, once the chief science officer, is now rather crazed as she accuses them of bringing “It” back to life and begs them to turn off the power so that “It” can be stopped. Too late; “It” has created other cyborgs from the Russian crew (including Nadia’s husband), as well as metal monsters both small and huge, and one by one the seven crewmembers from the sunken tugboat are either killed or recruited into the cyborg ranks. (The transformation scenes are bloody gross.)

In the communications room one of the crewmembers manages to send off a Mayday call before Everton, still hung up on his salvage, destroys the radio. Foster decks the asshole and says that he is no longer in charge. Using a computer they connect with “It”, who informs them that humankind is a virus that must be eliminated. End of communication. Oh shit…

Everyone leaves the room except Everton, who reconnects with “It” and says that he is the dominant life form there. “It” tells him to go to one of the workrooms, which he does. There, Everton appears fascinated with the process of human body parts being melded with machines. (We, on the other hand, are not as enthralled with the grossness.) 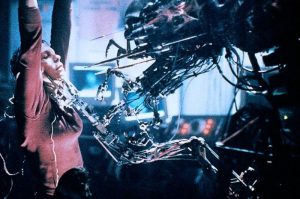 How is Foster going to get out of this one?

With the typhoon again raging, the surviving crewmembers futilely seek a way off this ship from Hell. Another one is lost to the storm. They escape the typhoon’s wrath on the bridge, where Foster surmises that the ship’s destination is an island where a British intelligence station is located. Oh, the damage that “It” could possibly do by gaining control of that! But before they can do anything about it they are reunited with Capt. Everton, who is now a cyborg and is determined to help “It” survive and thrive. Yes, another “Oh shit” moment…

So that is where I’ll leave you, just in case you’re titillated enough to download this gem and check it out. As mentioned, I get a kick out of Virus and, “piece of shit” or not, will continue to load this cult classic into the Blu-Ray player every few years.