My old pal Edgar was, uh, a rather complex individual (he said, by way of understatement). This post first ran in 2016. 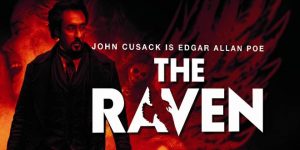 Okay, I’ll stay on my Edgar Allan Poe kick for one more week. The 2012 film, The Raven, is not about Poe’s classic poem, but about Poe himself—more specifically, about Poe’s last days of life in 1849 Baltimore. Despite much speculation the actual cause of Poe’s death is unknown to the present day. This film, starring John Cusack as Poe, offers a compelling “what if?”

While hospitalized and delirious just prior to his death, Poe called out someone’s name over and over. No one knew then to whom he was referring, or why. I won’t reveal that name, as it becomes a key plot point in the film. Interesting, don’t you think? 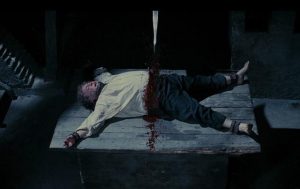 The Pit and the Pendulum…grisly!

AN INSPIRATION FOR MURDER

Edgar Allan Poe, broke and in his cups as usual, has returned to Baltimore to visit his beloved Emily and to see if a Baltimore newspaper will publish more of his stories or literary critiques. Despite the popularity of his tales and poems he is disliked by nearly everyone, especially Emily’s wealthy father. She appears to be the only one who believes in him.

Elsewhere, a police detective named Emmett Fields (Luke Evans; yeah, Bard the Bowman!) investigates a gruesome double murder. Behind an apartment door that had been locked from the inside, a woman is sprawled on the floor with her throat cut. Her daughter’s corpse is stuffed in the chimney. The window has been nailed shut—also from the inside. Where is the killer?

Fields realizes that the crime scene resembles a story that he once read: The Murders in the Rue Morgue, by Edgar Allan Poe. He questions Poe, who is stunned to learn that one of his stories inspired the murders. The writer agrees to help Fields, and almost immediately the two men are called to another crime scene. A rival critic of Poe has been sliced in two by a pendulum—down in a pit. Get it? 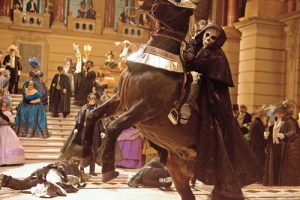 An unwelcome guest at the masquerade ball.

When they discover a scary red mask near the severed corpse, like the one in Poe’s The Masque of the Red Death, they are convinced that a serial killer is staging the murders based on Poe’s works. Emily’s father is hosting an annual masquerade ball the next night, and she and Poe had planned on announcing their engagement, against daddy’s wishes. Now, their main concern is protecting Emily. Accordingly, Fields and Poe, along with other cops, show up at the ball in costume.

But this killer is shrewd. He sends in a diversion: a man in a skeletal mask on horseback. While Poe and the cops swarm on him, even shooting the poor guy, the killer takes off with Emily. We eventually see her confined in a coffin—a la The Premature Burial.

NUMBER ONE FANS ARE SCARY

In a taunting note left for Poe, the killer demands that he publish a new story. If not, he’ll murder Emily. The psycho, it seems, is a big fan. And if Poe is not suffering enough, some Angry Villagers burn down his house, believing that he’s exploiting the murders in order to sell more stories. He shows up on Fields’s doorstep, and the cop takes him in.

With a raven hovering about all through the film, Emily continues to suffer, Poe continues to write, and the nut job continues his imitative murders. A woman’s corpse—and the ubiquitous raven—show up in an anatomy class at the medical school, a la The Mystery of Marie Rogêt. A sailor off a ship called the Fortunato is walled in below the city, just as a character named Fortunato met the same fate in The Cask of Amontillado.

Another clue leads them to an old church, where the killer awaits them. Fields is wounded, one of his men killed, while the nut job rides off on a horse. Poe sets off in pursuit, but the killer escapes. After returning to the churchyard, Poe finds an empty grave with a wooden cross bearing Emily’s name. 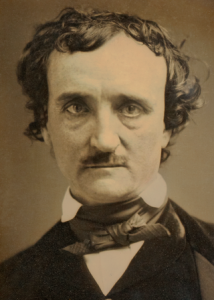 With Fields incapacitated, and Emily’s time running out, Poe writes one final story for the newspaper, offering to drink poison and trade his life for Emily’s. The newspaper goes to press, and he awaits the outcome…

And this is where I stop. Though hardly a perfect movie, The Raven does offer a tantalizing mystery, as well as an abridged romp through some of Edgar Allan Poe’s best-known works. And as I said earlier, who really knows what happened during Poe’s final days on this plane of existence?