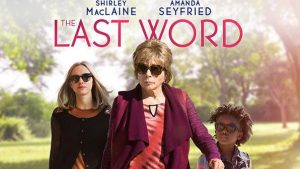 It is always a pleasure to see eighty-something Shirley MacLaine on the silver screen. Sadly, not a whole lot of people saw her perform in the 2017 comedy-drama, The Last Word.

MacLaine plays Harriet Lauler, a woman who is rich, retired, and reviled. We see this control freak wandering aimlessly around her huge house, and we experience her berating both the gardener and the cook. She has no joy in life, as is made obvious when she attempts suicide by overdosing on pills.

During her recovery, Harriet reads a number of obituaries in the newspaper and is struck with all of the positive things that family, friends, and co-workers have to say about the newly deceased. She wonders, “Will the same be said about me?” With this in mind she marches down to the local newspaper, reminds the publisher just how many times she saved his ass when she ran a successful advertising agency, and insists on borrowing the publication’s obituary writer to help her prepare her obit in advance of her death. 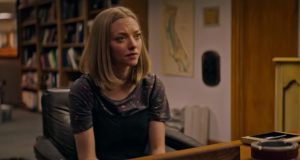 Anne is not thrilled about writing this obituary.

That writer happens to be a disillusioned young woman named Anne Sherman (Amanda Seyfried). She’s been writing about dead people for way too many years, and her dream of becoming a serious author is stymied by her inability to produce anything more than a lifelong journal—which she won’t even let anyone read. She is not thrilled about her boss assigning her to work with Harriet, even less so after she meets the old crab.

NOT EXACTLY A FAN CLUB

Talk about oil and water; early on, Anne is more than ready to walk away from this assignment. Having no choice, she sets out to interview the people on a list that Harriet gave her, family members and co-workers (no friends) from the old woman’s past. Some of them slam doors in her face or hang up the phone. Others speak of Harriet as if she were the devil incarnate and wish her a quick and painful death. Anne realizes that she is not going to have much with which to work.

Harriet’s family consists of an ex-husband and an estranged daughter who she hasn’t spoken to in decades. The latter refuses to talk to Anne, but the ex-husband is a bit more kindly and offers a good deal of backstory about Harriet. It is becoming clearer to Anne that writing a positive obituary for this complex, maligned woman is not going to be easy. 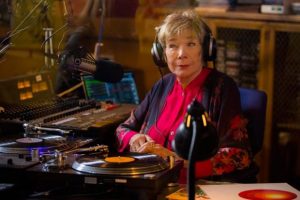 As their relationship develops, Anne discovers that music is one of Harriet’s passions when she comes across a collection of vintage LP records at the old woman’s house. Anne mentions a free-form FM station that she listens to, and when Harriet tunes in she is appalled by what she perceives as badly sequenced sets. She heads down to the station, displays her knowledge of music, and lands a job as the early morning DJ. Anne is amazed to hear her initial broadcast.

Some of the obituaries that Harriet read mention community service, specifically working with at-risk children. She has Anne set her up to do a lecture at a center that works with such youths, and she also requests to be a mentor to one of the more challenging kids, a foul-mouthed little girl named Brenda, who has a badder-than-bad attitude. Anne thinks this is a terrible idea. 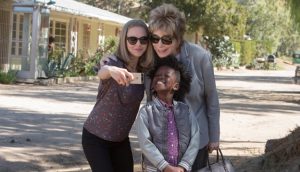 Anne, Harriet, and Brenda have fun on their road trip.

So we now have three generations of the most diverse individuals that one can imagine, and if the story was entertaining up until then, it only gets better. It begins when the trio takes a road trip so that Harriet can attempt reconciliation with her daughter (Anne Heche). A subsequent scene in a pond at night is priceless. There is so much that these three can learn from one another, and perhaps Harriet will see her perfect obituary, written by Anne…

I’ll stop here, so no spoiler alert. The Last Word may not be the greatest movie ever made (the critics were lukewarm), but it is both funny and poignant. And as I said before, watching Shirley MacLaine is always a joy.