Another strange role for the guy who played Captain Jack Sparrow and Tonto, among others. This post first ran in 2015. 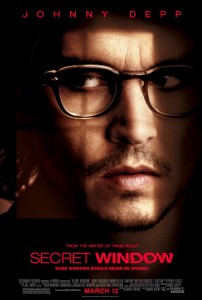 “You stole my story!” That is arguably the most memorable line from the 2004 psychological thriller, Secret Window. Based on a short story by Stephen King, the film stars Johnny Depp as successful but troubled writer Mort Rainey. Depp has played many a weird role, and this is one of the weirdest.

The film opens with Mort breaking into a motel room and confronting his cheating wife Amy (Maria Bello) and her lover, Ted (Timothy Hutton). He looks as if he’s about to kill them but instead storms out. Fast forward six months. Mort, depressed as hell and dealing with writer’s block, is holed up in a secluded cabin with his dog Chico somewhere in upstate New York.

Enter John Shooter (John Turturro), a Mississippi farmer dressed like an itinerant preacher of yore, including a wide-brimmed black hat. Shouting “You stole my story!” Shooter accuses Mort of plagiarism and leaves a copy of a manuscript titled, Sowing Season. At first ignoring the manuscript, Mort finally begins reading it and finds it almost identical to a story he published years earlier in a magazine, titled Secret Window. 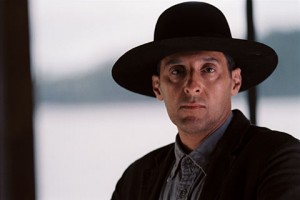 “You stole my story!”

When Shooter again confronts Mort the next day, Mort explains that his story was published years before Shooter’s manuscript existed. Shooter gives Mort three days to come up with a copy of the magazine. For emphasis he leaves a note on the cabin door that evening, and he stabs Chico to death with a screwdriver. Mort reports the incident to the town sheriff, an old duffer who doesn’t seem too interested about what happened.

Mort has still not signed the divorce papers, frustrating Amy and Ted. He drives to his old house to look for a copy of the magazine but is turned off when he sees the couple being all lovey-dovey outside. He then hires a private investigator named Ken to check out the cabin and grounds, which he does, finding nothing. They decide to interview an old man named Tom, who previously observed Mort talking to Shooter as he drove by. As soon as Ken leaves, Shooter appears, and in the ensuing confrontation he injures Mort.

Mort’s bad day continues when Amy calls to tell him that their house has burned down. He drives there and is told by the police that the cause was arson. He not only believes that Shooter was responsible, but he also begins to suspect that Ted, who hates his guts, hired Shooter. Ted has a slight southern accent but says that he’s from Tennessee, not Mississippi. His home town: a place called Shooter’s Bay.

Depression is a great excuse for writer’s block.

The next morning, Mort oversleeps and is late for the meeting with Ken and Tom at a restaurant in town. When he finally gets there he’s told that neither man showed up. On his way back to the cabin he spots Ted at a gas station. Ted has come to try and make Mort sign the divorce papers so that he and Amy can get on with their lives. During the confrontation Ted takes a swing at Mort and injures his hand.

Returning to his cabin, Mort answers a phone call from Shooter and goes to meet him in the woods. He finds Ken and Tom dead in the old man’s truck and promptly passes out, not coming to for hours. Shooter awaits him and says that the police will hold Mort responsible for the murders unless he shows him the magazine proving that Mort’s story was published years before Shooter wrote his manuscript. Mort explains that on the previous day, Ken had arranged for a copy to be overnighted by Mort’s literary agent. Mort says that he’ll go into town to pick it up and then meet Shooter at the cabin in a couple of hours. Shooter leaves, and the terrified Mort, not sure what to do, rolls the truck with the two dead guys into a water-filled stone quarry. 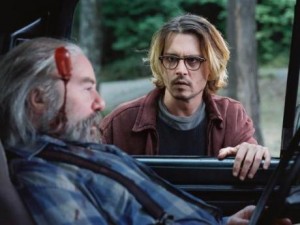 Mort’s meeting with old Tom did not go as planned.

Mort retrieves the overnight package and drives back to the cabin, where he finds that the mailer has been opened. The magazine is inside, but the pages containing his story have been torn out. By now totally frantic, he receives a phone call from Amy saying that she’s coming out to make sure he signs the divorce papers. Amy leaves Ted’s house after ordering him to stay put, but Ted, worried about her, follows a few minutes later…

NO SPOILER ALERT. At their last couple of confrontations Shooter told Mort that the ending of the story was all wrong and he needed to make it right. Well, that’s what Mort apparently intends to do. If you’ve seen Secret Window, you know what I’m talking about. If you haven’t, then be prepared. It’s a stunner.