It’s always gratifying to have a novelist as a main character in a movie. 😊 This post first appeared in 2015. 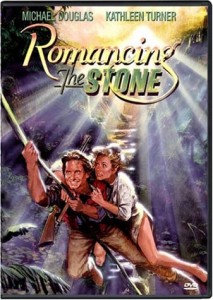 For many movie lovers—my bride included—Romancing the Stone (1984) and Jewel of the Nile (1985) are the perfect films. Action and adventure, outrageous comedy, romance, great cast—what more can you ask for from a fun flick? And even better, from my perspective: the main character is a bestselling romance writer!

Kathleen Turner plays Joan Wilder, a frumpy, lonely novelist whose books sell in droves around the world. At the beginning we hear Joan’s voiceover as we watch the hokey scene she’s writing. It’s a romantic western, replete with cringe-worthy narrative and dialogue. She finishes the book (on an electric typewriter; love it) and delivers it to Gloria, her editor at Avon Books. Gloria is always bugging Joan about her lack of a love life, saying that Joan is waiting for “Mr. Perfect” from all of her novels.

Joan’s sister Elaine is in Colombia, where her husband has recently been murdered. He managed to send a package to Joan containing a map leading to El Corazon, a legendary treasure. Two parties are interested in obtaining the map: Colonel Zolo, head of the military police—the man who murdered Elaine’s husband—and two bumbling crooks, Ralph (Danny DeVito, who provides a nonstop barrage of hilarious one-liners) and cousin Ira. Zolo has come to NYC and trashed Joan’s apartment looking for the map, while Ira, having kidnapped Elaine, orders Joan to bring the map to Colombia. This is not Joan’s thing. As Gloria reminds her, she gets sick going up the escalator in Bloomingdale’s. 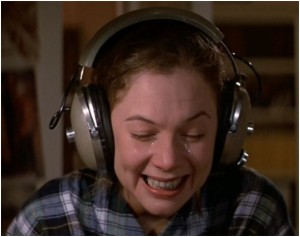 FROM MOUSY WRITER TO BOLD ADVENTURER

Zolo follows Joan to Colombia and steers her onto the wrong bus, which crashes out in the jungle. When everyone else walks off, Joan remains with Zolo, who assures her that another bus will be along soon. He then tries to take the map from her but is driven off by adventurer Jack Colton (Michael Douglas). His jeep was wrecked by the bus, and all the rare birds that he’d caught and hoped to sell for big bucks have flown south. Needless to say, he’s pissed.

Joan hires Jack to take her to a town and a phone so that she can contact Elaine’s kidnappers. Antagonistic at first, they are drawn together by their peril—Zolo has summoned his troops, who now pursue them—and especially by a night in a downed drug smuggling airplane, where they burn kilos of marijuana to keep warm. From there, they wind up in a small village, where drug king Juan, who lives in a palatial estate, turns out to be a big fan of Joan and her books. When Zolo and his men show up, Juan helps them escape. 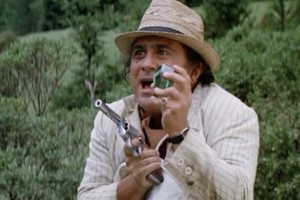 After Juan drops them off outside a town, Joan and Jack spot a landmark that indicates El Corazon is nearby. They hike to the town, where Joan calls Ira and is told to bring the map to Cartagena and await further instructions. By this time Joan has literally let down her hair and has gone from mousy to WOW! Jack is smitten, and he suggests that they go and find the treasure for themselves, then trade the map for Elaine—a win-win. By the time Ira and Ralph get to the site of the treasure, they’ll be long gone.

One problem, though: with Zolo still on their tail they steal a car, which happens to belong to Ralph, who is sleeping in the back. Ralph follows them into a cave, where they find El Corazon, a gorgeous emerald the size of a baseball. At gunpoint, Ralph relieves them of the jewel, but on their way back to the car Zolo and his men show up. Jack takes back the jewel as Ralph runs off. He and Joan drive into a river, go over a waterfall and wind up on opposite banks. Jack has the jewel, Joan the map. He says that he’ll meet her in Cartagena. She heads for the city, still a bit dubious about Jack’s reliability.

SPOILER ALERT (like, you haven’t seen this movie before?): when Jack doesn’t show up, Joan goes it alone and meets Ira in a deserted fort. She gives him the map and is reunited with Elaine. But before they can leave, Zolo shows up with both Jack and Ralph in tow. Ralph, who was beaten, has spilled the beans on the stone. Zolo cuts Joan’s hand and holds it over a crocodile pit, thinking that she knows where the stone is. Jack has hidden the stone on his personage, where the sun doesn’t shine, and he gives it up reluctantly. He kicks it into the air, and Zolo, tossing Joan to the side, catches it over the croc pit, only to have his hand and the stone swallowed by a huge reptile, which climbs out and heads for the harbor. 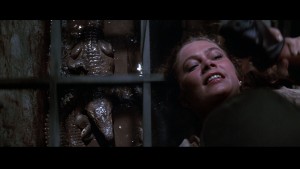 “Look at those snappers, will ya!”

There ensues an outrageous battle between Zolo’s men, Ira’s gang, and our heroes, culminating with Joan causing Zolo to fall into the crocodile pit, Ira escaping and leaving Ralph behind, and Jack, who had been holding on to the tale of the huge croc that swallowed the stone, letting it go to help Joan. Once assured she’s okay, he dives into the water after the reptile.

Flash forward a few months. Gloria is reading the last page of Joan’s latest novel—all of her adventures in Colombia, except with a different ending. Here, the heroine and the hero sail off around the world together, something that Jack promised he and Joan would do. When a radiant-looking but subdued Joan returns home she finds Jack waiting atop a huge sailboat, which he bought after recovering the stone. She joins him, and off they go to fulfill his promise.

Romancing the Stone made a star out of Kathleen Turner, and it also made a boatload of money. Its reviews were outstanding, and it has held up well, even thirty-five years later. (Geez!) 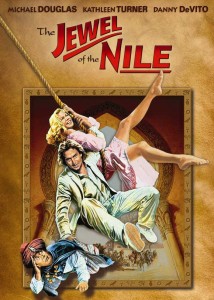 JEWEL OF THE NILE

I’m not going to spend a great deal of time on the sequel, which upheld the general rule of a sequel not living up to the original. Personally, I got a hoot out of it, especially when you have Danny DeVito doing his thing. And, believe it or not, it made more money than Romancing the Stone. But the critics hated it, and Kathleen Turner even tried to back out of making it. Only a large lawsuit brought her into the fold.

But with regard to Joan Wilder being a writer, there were a couple of interesting points presented. First, the film opens much the same, with Joan’s voiceover to a scene she’s writing, this time with her and Jack being married on a ship. That’s when a lot of nasty pirates appear, and a wild battle ensues. The dialogue and narrative are so bad that, for real, Joan takes her typewriter and throws it overboard. She’s on Jack’s sailboat, and they’ve been sailing around the world for six months now, and “happily ever after” isn’t what it’s cracked up to be, she’s discovered. 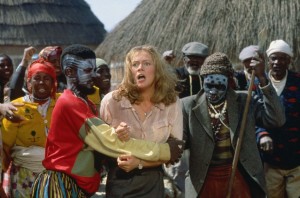 One of the Nubians wants to marry Joan.

Then, a guy named Omar, dictator of a small Arab country in Africa, shows up and offers Joan a chance to write his biography as he assumes a stronger grip over his people. He’s a murdering asshole, but he wants Joan to make him look good to the unknowing world. Seemingly burned out of being “just a romance writer,” Joan sees this as a chance to do something significant with her writing. Many writers face this same issue.

Off Joan goes, leaving Jack behind. She’s quick to learn what’s going on in this country and wants out, but no way. And Jack, after his boat is blown to smithereens by Omar’s men, is off to her rescue—with wisecracking Ralph as his sidekick. 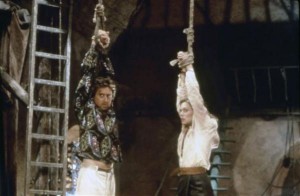 Jack and Joan are in trouble again.

The plot revolves around Al-Julhara, “The Jewel,” a holy man who wants to lead his people down a more peaceful path. Ralph winds up with a band of Sufis (hilarious stuff) who want to help The Jewel, while Joan, Jack, and Al-Julhara endure their share of escapes, battles, a sandstorm, an encounter with a tribe of Nubians, and much more as they try to stop Omar and his thugs from achieving their goals. Convoluted, to be sure, but still a lot of fun, IMHO.