This film could’ve been called “Romancing the Ghost.” I first presented the post in 2019. 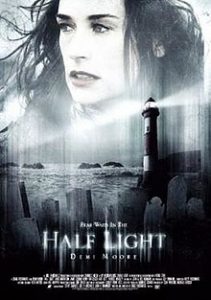 The 2006 mystery/ghost story, Half Light, starring Demi Moore, somehow got past me all these years. Well, better late than never. Here is a brief introduction, with absolutely no spoiler alert. I do not want to ruin this compelling film for anyone.

WHEN THE DARKNESS FALLS, THE DEAD WILL RISE

Moore plays Rachel Carlson, a bestselling American author who currently lives in London with her five-year-old son, Thomas, and her second husband, Brian. Hubby is a successful book editor but a frustrated writer, and early on we get a hint of his jealousy over Rachel’s success.

As Rachel works on her next novel, Thomas goes outside to play in the patio alongside a canal. Rachel had left the gate unlocked, and when she goes out to check on the boy, she discovers his body floating in the canal, which devastates her.

Rachel is curious about the old lighthouse.

Flash forward a few months. Rachel, still bearing the guilt over her son’s death, cannot finish her book, and her marriage is all but shot to hell. Needing to get away from it all, she moves to an isolated cottage along the coast of Scotland. Seems the ideal cure-all, until the ghost of her son begins to appear. At one point he drags her into the water, and he also rearranges the letter magnets on the refrigerator, the same way he used to leave his mom messages. Needless to say, this freaks her out, even more so when a young woman in the nearby town, who proclaims to be a psychic, tells Rachel that the spirit of her son is walking alongside her and trying to convey a message. The locals assure Rachel that the woman is a whack job. 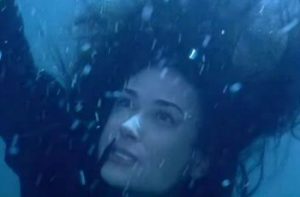 The visit from her dead son is not going well for Rachel.

An old lighthouse on a nearby island has intrigued Rachel from the outset, and one day she decides to explore it. She meets Angus, an affable widower, and is captivated by him, as well as the wild horses that roam on the island. She returns to the lighthouse a number of times and soon trusts Angus enough to tell him about her visions. Before long they wind up in Angus’s bed; Rachel is starting to feel like a human being again.

A neighbor of Rachel’s invites her to a birthday party in town. On a subsequent trip to the island she asks Angus to join her the next day at the party, and he agrees to meet her there at 2 p.m. Amid all the merriment, 2 o’clock comes and goes. Rachel had been watching the bay for some sign of Angus, and her worried expression causes some of the townsfolk to ask her who or what she is looking for. When she tells them, the people are stunned. Angus, the lighthouse keeper, they tell her, murdered his wife and her lover when he caught them screwing around—and then he committed suicide. When was this? Seven years ago! HOLY CRAP! 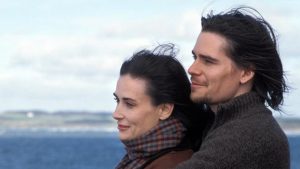 So is Rachel losing her mind, or what? You’ll have to find out for yourself, because I’ll stop here. There are a lot more surprises ahead in Half Light, and as I said, I have no intention of spilling the beans. Demi Moore gives a strong performance as the troubled novelist. I was pleasantly surprised.