A hotel room from Hell? I first presented this post in 2017. 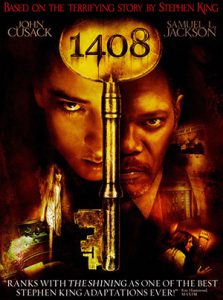 Writers love to write about other writers, and Stephen King arguably leads the league in that category. Just to name a few: The Dark Half, Misery, ’Salem’s Lot, Bag of Bones, and Secret Window, Secret Garden. And his short story, 1408, from his collection, Everything’s Eventual. (I did it once, in my horror novel, Demon Shadows, which included a whole bunch of creative folks at a writers’ colony.)

ARE WRITERS EVER SATISFIED?

The 2007 psychological horror film, 1408, is based on King’s story, but in truth it is considerably different. The main character, Mike Enslin (John Cusack), flopped as a “serious” writer but has made it as a bestselling author with books about haunted places across the country. He is a skeptic and thinks anything ghostly or otherwise supernatural is bullshit, but what the hell, it’s a good living. Much of his cynicism is due to the death of his young daughter a few years earlier, which led to a split with his wife, Lily. Originally from New York City, Mike now lives in Southern California.

After a surfing accident that briefly stuns him, Mike stops at the post office for his mail. He finds an unsigned postcard from the Dolphin Hotel in NYC, with the cryptic message, “Don’t enter 1408.” Since his next book is about haunted hotels he decides to accept the challenge, and off to the Big Apple he goes.

Room 1408 at the century-old Dolphin, Mike discovers, has not been rented for many years. The hotel’s manager, Mr. Olin (Samuel L. Jackson), explains that over fifty people have died in the room since the hotel opened, including one of its first guests, a man named O’Malley, who committed suicide. Others did not survive the first hour in 1408. (Which is on the thirteenth floor; get it?) Mike insists on staying in the room, saying that he doesn’t believe in the paranormal. Olin tells him that 1408 isn’t haunted as much as it is just an “evil room”. Reluctantly, he gives Mike the key.

A past victim of 1408 is about to take the plunge…again.

The room is drab, unimpressive, as Mike declares on his cassette recorder, and there is no sense of any paranormal activity. But as he looks around, the clock radio suddenly comes on and plays “We’ve Only Just Begun,” by The Carpenters. Just a trick engineered by Olin, Mike thinks. But shortly afterward it comes on again with the same song, and the display becomes a countdown, starting with 60:00. Oh crap…

THE HITS KEEP ON COMING!

Mike Enslin, you non-believer! Beginning with a window slamming down on his hand, Mike now witnesses a ghostly, ghastly parade of the room’s former residents/victims as they kill themselves in all manner of horrible ways. He also sees visions of his dead father, with whom he never reconciled, and his daughter, Katie. When it gets to be too much he tries to leave, but the room key is sucked into the keyhole, while the doorknob breaks off. Oh double crap… 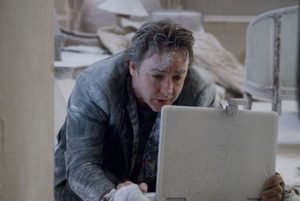 Room 1408 will definitely give you a chill.

Mike tries to escape through the air ducts, but guess who’s waiting for him up there: the ghost of old Mr. O’Malley, who attacks him. Back in 1408, he crawls out on the window ledge hoping to reach another room. But there are no other windows on the whole side of the building.

Using his laptop, Mike manages to contact Lily, who needless to say is surprised to hear from him. When he tries to explain the situation the sprinklers go off and short out the laptop. Later, as the temperature in the room drops to sub-zero, the laptop comes back on. Lily says that she sent the police to the hotel, as he’d asked, but they found room 1408 to be empty. A double of Mike then appears in a chat window and tells Lily to come down and join him. The real Mike can’t do a thing about it. Oh, triple crap…

One of the pictures on the walls of 1408 is that of a sailing ship in a storm. When the room starts shaking Mike breaks the picture, and water pours into 1408, flooding it. Mike goes under but then surfaces—on the beach in California, where his earlier surfing accident is repeated. You mean this was all a dream? Revitalized, he reconciles with Lily, who comes out west to join him. She urges him to write a book about it, which he does. Life is good… 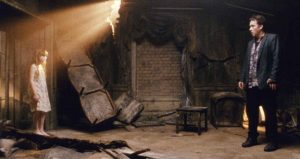 Mike sees his dead daughter amid the rubble of 1408.

…until he goes to the post office to mail the manuscript to his agent. He sees a construction crew working there, all of whom he recognizes as staffers from the Dolphin Hotel. They tear down the walls of the post office, leaving Mike in the rubble of 1408—which he had never left. He sees his daughter’s ghost, which crumbles when he tries to hug her. The room is returned to normal; “We’ve Only Just Begun” plays on the clock radio, which has reset itself to 60:00. Oh, crap to infinity…

And no, this is not the end, but I will leave you here, in case you want to view this gem—and 1408 IS a gem, both in its many positive reviews and its solid box office. Here’s the weird thing: it has no less than FOUR endings. Apparently the focus group did not like the first one, so they made another, and then it snowballed. During its 2007 theatrical release it had different endings in different countries, all of which are on the Blu-Ray DVD extended version that I own. So, take your pick.

As an aficionado of horror movies, I tend to be a bit jaded. But I kid you not, at times 1408 scared the living crap out of me, and I thought about it long after the first time I watched it. You can’t ask for much more from a film, can you?