Let us hope our world never devolves into post-nuclear chaos. I first presented this article in 2016.

It is not easy to watch this 2010 post-apocalyptic drama. Really, who wants to see the scorched earth of our own country? But given that the star of The Book of Eli is Denzel Washington, I’m there! As an actor he is, IMHO, simply the best. 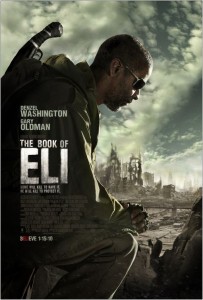 With that tagline, the story opens three decades after the nuclear apocalypse, somewhere out west. A nomad named Eli, armed to the max, is a man on a mission. Seems that he’s carrying a book—or to be more precise, he’s carrying what many consider THE book, a Holy Bible, King James version, with a beautiful leather cover that has a lock on it. He reads from it every night, and he protects it—and himself—from the lawless bands that roam the countryside in this survival-of-the-fittest world.

In backstory spread throughout the film we learn that Eli, who lived back east, survived the nuclear war by going underground. After emerging, he was led to the book by a voice, which tells him that this is the last remaining Bible. The voice instructs him to take the book to the west coast, where it will be safe. It also assures Eli that he will be protected and guided on his journey. He’s been making his way west ever since.

TROUBLE IN A WESTERN TOWN

Eli’s dedication to his mission is evident right from the start. When directly confronted by a brutal desert gang, he kills all six of them in a matter of seconds with minimal effort. Later, he observes from afar as a biker gang attacks a couple on the road, killing the man, raping the woman, and taking their possessions. Reminding himself to stay focused and not become involved, he walks away from the assault.

Among Eli’s prized things is an ancient iPod, which contains a playlist of old rock ’n roll. His battery low, Eli walks into a small town to see if he can barter for a charge. The town, which looks like something out of Gunsmoke, is run by a ruthless nutcase named Carnegie (Gary Oldman). This guy is obsessed with finding a copy of the Bible, believing that possession of “The Word” will enable him to ensnare the minds of many more people and lead to the establishment of more towns, with him, of course, in charge. He sends his illiterate henchmen out endlessly to find books, but so far they have not returned with the right one. The biker gang that Eli witnessed earlier was on just such a book hunt, and now we see them delivering a stack to Carnegie, who again is frustrated. 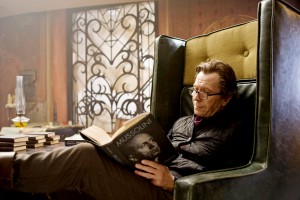 Eli has found a guy who can charge his iPod. While waiting, he goes into a bar—owned by Carnegie, of course—to barter for water. The bartender sends a young woman named Solara (Mila Kunis) out to fill Eli’s canteen. Before she returns, one of the lowlifes from the biker gang menaces Eli. Although he’d rather avoid trouble, Eli is forced to kill this guy, as well as the rest of the gang. Carnegie’s men quickly show up and take him to their boss at gunpoint.

Eli impresses Carnegie as a literate, educated man, in addition to his fighting skills. He asks Eli to stay and serve as one of his assistants. Eli refuses, but Carnegie tells him to “think it over” and locks him in a room. Later he sends Claudia, his woman, to Eli’s room with food. Claudia, who is blind, hates Carnegie, but she puts up with him for the sake of her daughter, Solara. Talking to Eli, she senses his decency.

Carnegie then sends Solara to offer her body to Eli, thinking that might convince him to stay. Eli wants no part of it, but if Solara fails, her mother will likely get beaten, so she begs Eli to let her remain there till morning. When she sees the Bible and wants to know more about it, Eli packs it up and says nothing. But he shares his food with Solara, who is impressed when he says grace prior to the meal. 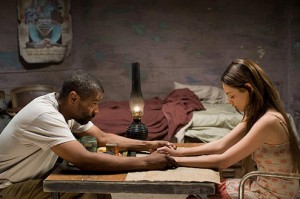 Eli stuns Solara by the simple act of saying grace.

The next morning Solara sits down to breakfast with her mother and Carnegie. When she begins to recite grace, Carnegie freaks. He demands to know if Solara saw the book that he’d been seeking in Eli’s room. Being illiterate, she doesn’t know what it said on the cover, but when she makes the sign of the cross, Carnegie knows. He hurries to Eli’s room, finding it empty. Eli has escaped out the window.

Having retrieved his iPod, Eli is walking out of town when Carnegie and his henchmen appear. Carnegie asks him one last time to stay, then orders his men to open fire when he refuses. Eli appears unharmed by the bullets, and in turn he kills a number of Carnegie’s men. He also wounds Carnegie in the leg. As he leaves town, Solara hurries to join him. Her mother has told her that she will be safer with Eli than if she stayed there.

Eli does not want Solara along. To placate him, she leads him to a cave that contains a hidden water source. Eli locks her inside and continues on alone. Later, she escapes and follows him but is soon confronted by two lowlifes, who attempt to rape her. Eli shows up and kills them both. Solara hugs him, and they continue on.

Carnegie and his men finally set off in a variety of vehicles. When they find the two dead scumbags they know they’re not far behind, but it is late, and they decide to wait until sunrise.

THE HOUSE OF CANNIBALS

Eli and Solara spend the night in an abandoned power plant, where he tells her about how the book came to him, and what he must do. Solara is confused by all of this, but eventually she comes to understand that Eli is acting on faith. She asks him to read to her from the book, and without opening it he recites the 23rd Psalm (“The Lord is my shepherd…”). She is smitten by the power of the words.

This “abandoned” house is anything but…”

The next day they walk up to a seemingly isolated house but are trapped by an eccentric older couple, George and Martha. After they assure the pair that they mean no harm, Martha invites them in for tea. There is a cemetery out back that, George explains, is filled with people who attacked them. When Martha comes down with “the shakes,” Eli tells Solara that it’s time to go…these people are cannibals who ate the folks in the graveyard.

But, easier said than done—Carnegie and his convoy pull up in front, locked and loaded. Not to worry, old George says as he reveals an arsenal vast enough to start a war. A battle ensues, and Carnegie’s ranks are depleted, but they soon kill the old couple and take Eli and Solara prisoner. Carnegie holds a gun to Solara’s head to make Eli reveal where he’s hidden the book in the house, and Eli tells him.

When the book is retrieved, Carnegie lets Solara go. “God is good,” he says. “All the time,” Eli replies. “Not all the time,” Carnegie counters—and shoots Eli in the gut. Taking the screaming Solara with them and leaving Eli in the dust, they drive off…

And that is where I will leave you, with no spoiler alert. What follows are some of the most remarkable scenes in the film, and if you’ve seen The Book of Eli, you know what I’m talking about. Roger Ebert said it best in his solid review: “You won’t be sorry you went. It grips your attention, and then at the end throws in several WTF! moments, which are a bonus.”

Indeed they are. And who am I to intrude upon a WTF moment?