Throwback Thursday: Films About Books—In The Mouth Of Madness

Reading horror novels could be hazardous to your health.  😊  This post first ran in 2016.

It is pretty well accepted that reading books can influence people in many ways, both positively and negatively. But can they drive readers to madness and murder? 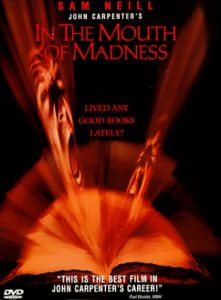 In the Mouth of Madness, the bizarre 1995 film—its title is an homage to H.P. Lovecraft’s At the Mountains of Madness—directed by John Carpenter, posits that this very thing can happen. The film was the third in what is referred to as Carpenter’s “Apocalypse Trilogy,” stories about the end of the world as we know it. They include The Thing in 1982 (alien takeover), Prince of Darkness in 1987 (Satan), and In the Mouth of Madness (ancient gods/monsters). Different stories to be sure, but all with the same endgame: WE ARE SCREWED.

THE ATTACK OF THE LITERARY AGENT

The story, with no spoiler alert: John Trent (Sam Neill), once a tenacious insurance fraud investigator, is locked up in a psychiatric hospital. A shrink asks him to explain what happened that landed him there. Trent is happy to oblige.

Trent is having lunch with a client as they discuss his next assignment: following up on a claim by Arcane Publishing that their cash cow, horror author Sutter Cane, has gone missing, weeks before he was to deliver the much-anticipated manuscript for his next book, In the Mouth of Madness. Cane is the most popular author in the world, even outselling Stephen King, Trent is told, and his works are scarier. Trent must find him and prove that his “disappearance” is a publicity stunt, or the insurance company could be out a small fortune.

Across the street is a bookstore, its windows crammed with Sutter Cane posters and books, his last bestseller, The Hobb’s End Horror, featured prominently. Suddenly a crazed, ax-wielding man crosses the street, smashes the restaurant window, stands over Trent and asks him if he reads Sutter Cane’s books. Before Trent can reply the guy raises the ax, but before bringing it down he is shot dead by a cop. The nutcase, Trent learns, was Cane’s literary agent, who went crazy after reading one of Cane’s books and murdered his family.

THE TOWN THAT WASN’T 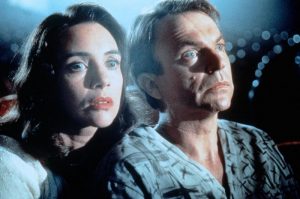 Still skeptical about Cane’s disappearance, Trent meets with the head of Arcane Publishing, who wants him to go forward with the search for Cane and—most importantly—bring him the new manuscript. Cane’s editor, Linda Styles (Julie Carmen), will accompany him. Earlier, she had received the first part of the new book. She tells Trent that Cane’s stories have caused paranoia and other weird symptoms in what she calls “less stable readers.” Trent is amused by all of this.

So where to begin the search? Maybe Hobb’s End, the fictional town featured in Cane’s last novel? Trent, who had been reading Cane’s backlist to get him up to speed, notices a series of clues on the book covers. He comes up with a specific location in New Hampshire, and off he and Styles go.

Driving along country roads late at night they encounter all sorts of weird phenomena before coming to a covered bridge, where they emerge in bright daylight—right in the middle of Hobb’s End. They find that everything is exactly as Cane described in his last book. Trent believes this is all part of the publicity stunt, but Styles swears that it is not. She admits that the “disappearance” was staged to promote the new book, but this town was not part of it. 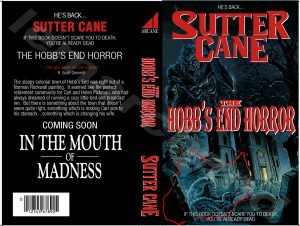 SURE, AUTHORS ARE ECCENTRIC, BUT…

As Trent and Styles explore the town they witness all manner of bizarre occurrences, most of which Styles recognizes from Cane’s novel. They soon stand before a church, and Styles goes inside, where she finds Cane pounding out more of In the Mouth of Madness on an old manual typewriter. Reading it, she goes mad and comes on to Cane. Eventually she does the same with Trent who, having witnessed more than his share of insanity, decides that it is time to get outta Dodge—especially when a guy in a bar, after warning Trent to leave, commits suicide. Doubly motivating: a huge crowd of crazed townsfolk, armed to the teeth, confront him outside. Time to go!

Trent drives out of Hobb’s End, only to find himself back on Main Street a few minutes later, facing the same loonies. He tries the other direction—same result. A few attempts later he crashes his car as he tries to avoid hitting Styles. He later awakens inside the church, where he and Styles are met by Cane, who calmly explains what is going on.

Sutter Cane is about to open his mouth…

It seems that his readers’ reactions to his stories have somehow freed a race of ancient gods—monsters, all of them—who once ruled the Earth and now want to reclaim it. John Trent, according to Cane, is one of the characters in his book. His role is to deliver In the Mouth of Madness to Arcane Publishing, which will hasten the fall of the human race.

Uh, right, Trent thinks, until Cane tears his face open, creating a portal to the dimension in which the beasties have been confined. As the horrors pour out, Trent and Styles set off down a long corridor. Soon these foul things are right on their heels. How will this end…?

I’ll leave you here, wondering how this story within a story will resolve itself. As an author—of horror novels, no less—I found this “Lovecraftian” tale quite fascinating. Though loath to admit it, I had not read much of H.P. Lovecraft in the past. But I now have his entire works on my Kindle, so this will be rectified in the not-too-distant future. As for In the Mouth of Madness, I learned that people either love or hate the film, with little gray area. Count me among the former.