Throwback Thursday: Exploring The Planet Of The Apes—Part Four 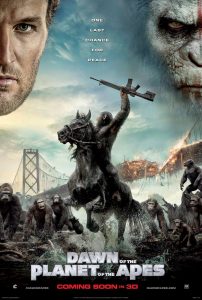 This film was one of the best sequels to appear in a long time. I first presented this post in 2017. And BTW, Happy New Year!

Andy Serkis returns as Caesar, though with a new supporting cast of humans, since most of the latter around the world have perished from the Simian Flu, as the plague came to be known. Ten years after the events of the previous film, Caesar leads a colony of apes in Muir Woods. A community of human survivors exists in San Francisco, but so far they have not troubled one another.

Two young apes encounter a small party of humans, who have entered the woods to repair a hydroelectric dam and restore power to their community. A man named Carver panics and shoots one of the apes, wounding him. Caesar and his followers surround the humans and order them to leave, even though the group’s leader, Malcolm (Jason Clarke) tries to reason with him. Then, under the urging of an ape named Koba, who was badly mistreated at Gen-Sys and hates humans, Caesar leads his army into San Francisco, where he warns the humans, most of whom live inside a tower, that the apes do not want war but will defend their territory if necessary. 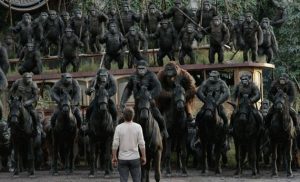 Caesar and the apes warn the humans not to start anything.

The colony’s leader, Dreyfus (Gary Oldman), does not trust the apes, but Malcolm asks for time to try and reason with Caesar and let them work on the dam. Dreyfus agrees, but only after arming the group with weapons from an abandoned armory. Malcolm leads them just outside the woods, where they wait as he enters the apes’ village. Caesar prevents the apes from harming Malcolm and agrees to give them one day, as long as they surrender their guns.

As the apes oversee the work on the dam’s generator, bonds begin to form. The scene of Malcolm’s son, Alexander, sharing a book with Maurice, the gentle orangutan, is priceless. All seems calm—until Caesar discovers a gun that asshole Carver had hidden, and he orders the humans to leave. 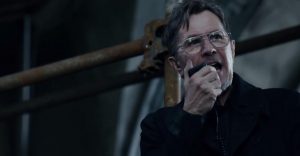 Dreyfus hopes there are other survivors that can help him battle the apes.

But before they do, Malcolm’s wife, Ellie (Keri Russell), tends to Caesar’s sick mate, Cornelia. Grateful, Caesar gives the humans another day to work on the generator. This pisses off Koba, who had gone to the human’s colony on his own and discovered their armory. Koba confronts Caesar, who beats the crap out of him but refrains from killing him, citing the old First Law, “Ape shall not kill ape.” Koba goes back to the armory and steals an assault rifle after killing two guards. Returning to the woods he finds Carver alone and kills him.

THE FALL OF CAESAR?

After the dam is repaired there is a celebration, during which Koba starts a fire in the apes’ village. With the others distracted he shoots Caesar then blames the humans. Taking charge, Koba leads the apes into San Francisco, where they arm themselves and attack the humans, imprisoning many of them. Dreyfus and a few others escape and go underground. Koba, taking over the tower, also imprisons all apes who remain loyal to Caesar, including Maurice. 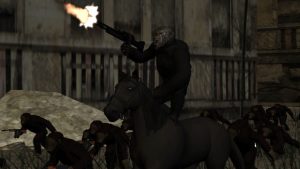 Koba leads the apes against the humans.

Malcolm finds Caesar badly wounded. He and his people transport Caesar into San Francisco, and he leads them to the house where he grew up with Will Rodman and his dad, in a neighborhood now overgrown with foliage. Malcolm hurries to the colony to look for medical supplies but is confronted by Caesar’s son, Blue Eyes, who had chosen to follow Koba. The young ape spares Malcolm, and they return to the house, where Caesar reconciles with his son. Blue Eyes then frees the imprisoned humans and apes, and Malcolm leads the apes into the tower. He then seeks out Dreyfus, who says that his people have finally made contact with other survivors at a military base up north. These people are now on their way to help battle the apes.

Caesar, who has recovered quickly, confronts Koba near the top of the tower, and their mano a mano (ape-o a ape-o?) battle is compelling. At the same time, Dreyfus sets off explosive charges, sacrificing himself and bringing down much of the tower. As Koba, who has been overpowered by Caesar, hangs on the edge of the ruins, he reminds Caesar about “Ape shall not kill ape.” Oh no, not this time; Caesar lets him plummet to his death. 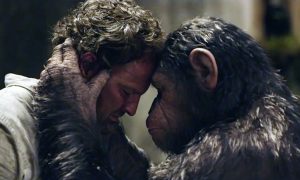 Caesar and Malcolm part as friends.

Malcolm tells Caesar that an army of humans is on the way. Caesar knows that humans will never forgive apes for what has happened to the world. He and Malcolm acknowledge their strong bond just before Malcolm leaves with his family. Caesar stands before his apes as they await the war to come.