Throwback Thursday: “Enough Is Enough!” Lines From A Snake-Centric Movie 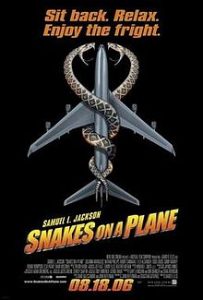 At least three-quarters of the lines in this film are quotable. This post first ran in 2019.

Last week, when I wrote about the horror/comedy/thriller/creature feature, Snakes on a Plane, I mentioned that there are enough outrageous quotes in this film to warrant its own post. Time to justify that comment.

I also said that the film’s most iconic line comes from Samuel L. Jackson’s character, FBI agent Neville Flynn, when he sees the dead co-pilot in the cockpit amid a gaggle of the slimy critters and shouts: “Enough is enough! I have had it with these motherfucking snakes on this motherfucking plane!” (Jackson, who has appeared in just about every movie made over the last four decades, arguably leads the pack in his usage of the word “motherfucker” and its derivatives.)

Trying to decide how to eliminate the snakes so that he can reach the controls, Flynn pulls out his gun and says, “Everybody strap in. I’m about to open some fucking windows!”

Before all of the snakes show up, chauvinist asshole co-pilot Rick spots flight attendant Claire and says, “Oh my. I was hoping you’d be the sky candy on this flight. You’re looking especially delicious this evening.” To which Claire replies, “I love it when you demean me, Rick.” 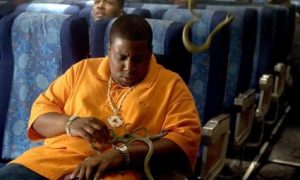 Troy is not thrilled about his seat mates…

Later on, Rick has been injured by the snakes but, with the pilot dead, he is determined to take over the controls. Claire asks him, “You sure you can fly this thing with one hand?” Rick’s reply: “Honey, you’d be surprised what a man can do with one hand.”

Obnoxious passenger Paul, a Brit, is not thrilled about being forced from first class to coach. Nor is he enamored of a chihuahua named Mary Kate, who resides in passenger Mercedes’ purse: “Fucking dog, fucking coach, fucking Americans.”

Mercedes has a worthy comeback: “Don’t worry, Mary Kate, his hair plugs can’t hurt you.” (Later, Paul will feed Mary Kate to one of the snakes. But not to worry; karma is a bitch.)

The passenger taking a leak in the restroom has a predictable reaction to a snake latching on to his penis: “Aw fuck! Fucking bitch! Get off my dick! Aw fuck! Fuck!” 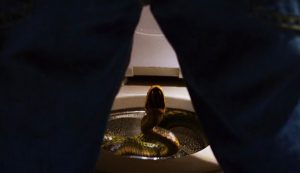 From the toilet to the guy’s most prized possession…

Another passenger, Big Leroy, has a similar reaction for a different part of the anatomy: “Ow! Get this fucking snake off my ass!”

Flight attendant Ken manages to throw a small snake into a microwave oven, and as it sizzles he says, “Who’s your daddy now, bitch?”

Flynn asks co-pilot Rick for some suggestions. His sarcastic reply: “All right. Well, I know what I gotta do. We’re in a 200-foot aluminum tube and we’re 30,000 feet in the air. And any one of those slimy little pieces of shit can trip a circuit or a relay or a hydraulic and this bird goes down faster than a Thai hooker. So my job is to keep LAX informed on how totally screwed we are, and then find some way to keep this mother in the sky another two hours. Figure that out.”

Flynn notices that Rick has throttled back, and they’re going slower. Rick tells him that it’s either that or option B, which is: “I go faster and the engines seize up. We eventually plummet to a horrible death. They spend the next year identifying femurs.” 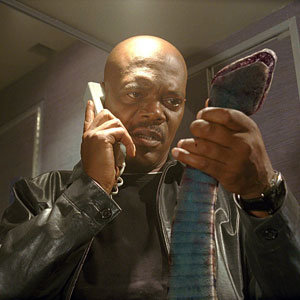 “Hello, is this Acme Pest Control?”

After co-pilot Rick’s demise, a young, jive-talking guy named Troy—bodyguard to a rapper—takes over the controls. Why? Because he’s done flight simulations on PlayStation 2. His introduction to the terrified passengers: “This is your new pilot Troy speaking, and sitting next to me is my main man, my brother from another mother, the biggest pimp that I know, Superfly Agent Flynn. Ladies and gentlemen, Agent Flynn.”

When Flynn asks Troy how good he is at this game, Troy tells him, “Yes, man, no problem. Well, I mean, my older brother Randy has got the high score, but I’m good. Asshole never lets me hear the end of it.”

“Edited for TV” does not usually bode well for “R” rated films. Let’s conclude this post with what they did to (read: butchered) Samuel L. Jackson’s classic quote: “Enough is enough! I have had it with these monkey fighting snakes on this Monday to Friday plane!” One word: “Oy!”