Should’ve kept mine, probably worth a fortune. This post first ran in 2017. 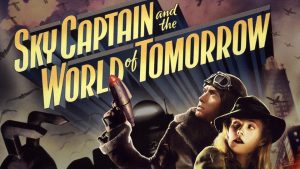 The unique 2004 science fiction-adventure film, Sky Captain and the World of Tomorrow, has a definite 1930s-’40s feel about it. In a way it pays homage to old luminaries such as Flash Gordon and Captain Midnight. (Those of you in my, uh, approximate age bracket doubtless recall those secret decoder rings, yes?) Described by some as “dieselpunk,” Sky Captain is a CGI-fest that was conceived and initially produced in some guy’s living room. Though it performed poorly at the box office it ultimately became a cult classic. Many film critics loved it, thanks in part to the powerhouse threesome at the top of the cast: Jude Law, Gwyneth Paltrow, and Angelina Jolie. It was also one of the first films to be shot entirely on a “digital backlot.”

WHO WILL SAVE US?

With that tagline, Sky Captain opens with the (safe) arrival of the German zeppelin Hindenburg III atop the Empire State Building. A scientist named Vargas, who had been a passenger, hands a package containing two vials to a messenger with instructions to deliver it to a Dr. Walter Jennings. When the messenger looks back, he sees that Vargas has disappeared. 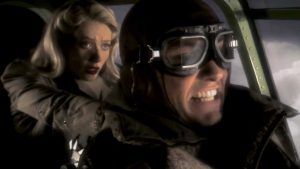 Polly is a bit nervous with daredevil Joe at the controls.

Reporter Polly Perkins (Paltrow) is investigating the strange disappearance of six scientists, including Dr. Vargas. A message sends her off to Radio City Music Hall where, as The Wizard of Oz plays in the background, Dr. Jennings tells her that Totenkopf is coming for him next. Before she can learn more, giant flying robots attack the city. “Sky Captain” Joe Sullivan (Law), leader of the mercenary Flying Legion, is summoned and manages to take down one of the robots as Polly, his former girlfriend, photographs the attack from the street. (He even recognizes her from afar.) The other robots fly off as word comes that there are many attacks occurring all around the world.

THE WEIRD WOMAN IN BLACK

Joe takes the disabled robot back to the Flying Legion base, where Dex, his techie expert, studies it. Polly shows up and, despite the animosity between her and Joe—their banter is a hoot—they agree to share information. They drive to Dr. Jennings’ laboratory in the city, finding it ransacked. A dying Jennings gives Polly the vials with a warning to keep them out of Totenkopf’s hands. Still in the dark as to who Totenkopf is, Polly does not tell Joe, who is chasing off a weird-looking woman in ninja garb, about the vials. 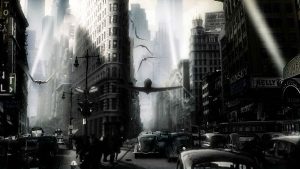 Back at the base a squad of robotic drones begins an attack, destroying most of it. Joe and Polly pursue them into New York where, outnumbered, we learn that Joe’s Curtiss P-40 plane has been modified to travel underwater. He pulls this off to escape the drones, scaring the crap out of Polly. They return to the devastated base, where Dex, before being captured by one of the robots, has left a clue to the origin of the signal that controls the metal monsters: somewhere in Tibet.

A SHORT STAY IN SHANGRI-LA

Polly and Joe fly to Nepal and trek into Tibet, where two guides lead them to an old mining outpost. The guides, who work for Totenkopf, steal the vials from Polly—Joe is really pissed off when he finds out that she had them—and lock the pair in a roomful of dynamite. They escape but are knocked unconscious and awaken in the mythical Shangri-La, where they have been taken after being saved by Tibetan monks. The monks tell them that Totenkopf made slaves out of their people and forced them to work in the uranium mine, where radiation killed most of them. One survivor—who looks real bad—provides a clue that sends them off to an island where Totenkopf intends to pull off the last phase of his “End of the World” scenario.

As they fly to this cryptic island, the plane runs out of fuel. Not to worry—just like in those old serials, help turns up in the form of a British navy helicarrier, another dieselpunk creation. The carrier is under the command of an eyepatch-wearing Franky Cook (Jolie), another one of (surprise!) Joe’s old girlfriends. Polly is not thrilled. 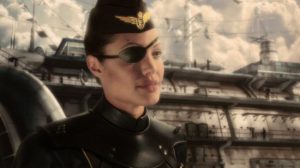 Commander Franky Cook is quite self-assured.

It turns out the island is not too far off, so Franky agrees to lead an attack that will land Polly and Joe on it. The ensuing battle with more robots takes place underwater (Franky’s planes are also multi-use), during which Joe manages to maneuver his plane/sub through an inlet. They emerge on the tropical island, where the first inhabitants that confront them are—wait for it—dinosaurs!

I’ll stop here, so we don’t need a spoiler alert. There is plenty of action ahead as they penetrate Totenkopf’s subterranean facility and learn the secret of the “World of Tomorrow.” I will just mention one pretty cool thing: a cameo appearance by arguably the greatest actor of the twentieth century, Sir Laurence Olivier. Weird, given that he passed away in 1989.

So if you happen to possess one of those old Captain Midnight secret decoder rings (they’re worth a fortune these days), just slip it on while you watch the entertaining Sky Captain and the World of Tomorrow. It will just feel right.