This post, first presented in 2015, was the first in my ongoing “Blowing Shit Up” series. 😊

Being a guy, it’s in my DNA—like most guys everywhere—to love movies in which they’re blowing shit up. Lots of shit; the more the better. In this new occasional series I’ll be exploring films that shake the theater—or your living room—and cause premature hearing loss. 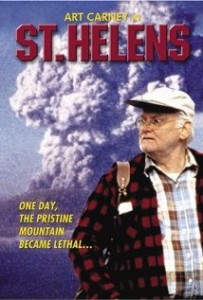 As I see it, there are a couple of ways to blow shit up. There’s the good old American way, with lots of bombs and other ordnance. (Think any of the Expendables movies, as well as a million others.) Then, there is Mother Nature unleashed, and she can be tenacious. This post will address a couple of films in the latter category. 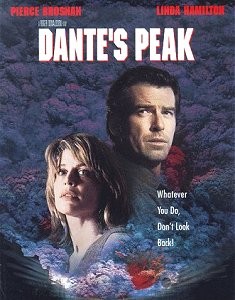 When Mount St. Helens in Washington State erupted in 1980, you would’ve figured that Hollywood would jump all over it. But other than a 1981 made-for-cable movie called St. Helens, Killer Volcano (starring Art Carney!), the idea for a big-budget volcano movie lay dormant until well into the ’90s.

Then, early in 1997, Hollywood apparently made up for lost time by releasing two, count ’em, two, volcano movies within two months of each other. Dante’s Peak, the first, threatened to blow the shit out of a small, idyllic town. And Volcano? Heck, that one was poised to take out all of Los Angeles!

THE PRESSURE IS BUILDING

With that tagline, Dante’s Peak opens with volcanologist Harry Dalton (Pierce Brosnan) attempting to flee an erupting volcano in South America. Good opening; shit is already blowing up. As he and his significant other, Marianne, drive away, a large rock tears through the top of their truck and kills her. Harry is devastated.

Fast forward four years. Harry’s boss, Paul Dreyfus, sends him to the town of Dante’s Peak, Washington, to check out some seismic activity around the nearby dormant volcano that gave the town its name. (Earlier, we’ve seen a couple of hikers skinny-dipping in a hot spring on the mountainside when the water begins to boil.) Harry arrives during a celebration—the town has been voted one of the best small towns in America in which to live.

Where to go when the volcano blow…

Harry meets the mayor, Rachel Wando (Linda Hamilton) and her two kids, Graham and Lauren. Rachel offers to drive Harry up the mountain to take his readings. They pick up the kids’ grandmother—Rachel’s ex-mother-in-law—who lives on the mountain. She suggests they go swimming in the hot spring. Noticing dead animals nearby, Harry saves Graham from diving into the water. That’s when the two bloated corpses bob up.

Harry notifies Paul, who arrives the next day with a team and a lot of high-tech equipment. He is convinced that the mountain is primed to blow, but after a week of monitoring the activity to no avail, Paul is ready to pull out. Harry goes to Rachel’s place to say goodbye to her and the kids; they’ve all grown quite fond of one another by this time. When he fills a glass with water from the sink, Harry notices it contaminated by volcanic residue. Ah-ha, he was right! He shows the evidence to Paul, who tells Rachel and other townies that they’d better plan an evacuation. Alas, too late…

WHERE TO GO WHEN THE VOLCANO BLOW

I don’ know, Jimmy Buffett sang, and neither do most of the town’s residents, as Dante’s Peak violently erupts, lava starts flowing, earthquakes rock the region, and all kinds of shit starts blowing up. Some folks manage to get outta Dodge, others are not so lucky. Rachel’s kids, worried about Grandma, head up the mountain in their mom’s SUV, with Graham driving. (He’s about ten.) Harry and Rachel follow. 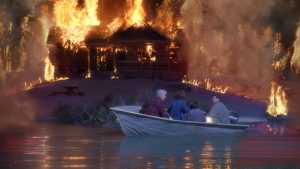 By the time they’re all reunited, lava has engulfed most of the mountainside. Grandma lives alongside a lake, and they manage to escape in a skiff that has an outboard motor. But the volcano has turned the water to acid, and the propeller is dissolved just short of the other side. Grandma, who blames herself for their peril—she wouldn’t leave her home when first warned—jumps into the lake and tows them to the shore. You don’t want to know what the lower half of her body looks like when she dies.

Okay, no spoiler alert. Suffice to say, the nonstop balance of the film details their desperate attempt to get off the mountain as shit continues to blow up. The ending might stretch credulity to its limits, but what the heck, it’s an exciting film with characters that you can root for. 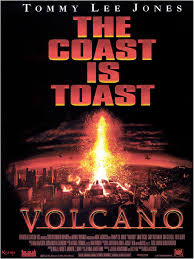 THE COAST IS TOAST

With that tagline, Volcano premiered soon after Dante’s Peak. It opens with a relative whimper: an earthquake rattling the greater LA area. That’s a big ho-hum for most of us Southern Californians. Mike Roark (Tommy Lee Jones) interrupts a vacation with his daughter Kelly to help out. But his help doesn’t appear to be needed—until seven workers are burned to death in a storm drain.

Geologist Amy Barnes (Anne Heche) believes that a volcano is forming under the city but can’t convince Mike. With her assistant she descends into the storm drain where the workers were killed. Another earthquake strikes, and a large crack reveals a lava flow. The assistant falls in and dies. 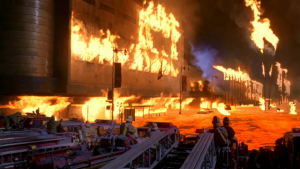 No shopping on Wilshire Blvd. today.

And now, shit starts blowing up like you would not believe. As magma flows along Wilshire Boulevard, lava bombs shoot up from below and take out stores, buildings, homes, and everything else in their path. Mike is right in the middle of this with Kelly who, after sustaining an injury, is taken by a doctor to a triage area at the Beverly Center.

Amy manages to find Mike in one of those “Do you believe me now?” moments. Together they come up with a plan to stop the lava flow. In an operation that should’ve taken days—they manage to pull it off in about twelve minutes—they halt the flow, and everyone celebrates. 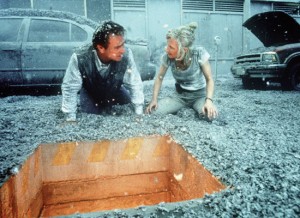 “Do you believe me now?”

Hey, not so fast. Still wary, Amy does some further exploring and discovers that the underground flow is still active. It has found a passage through a subway tunnel and is headed for—you guessed it—the Beverly Center, where Mike’s daughter and a whole lot of other people have taken refuge. OMG!

Again, no spoiler alert. I’ll just say that you can expect a whole lot more shit blowing up, and an ending that stretches credulity way beyond that of Dante’s Peak. I don’t care; Volcano is fun to watch, and you’ll even see a solid performance by a much younger Don Cheadle, one of my favorites. As the end credits begin, we learn that this new volcano has been dubbed Mount Wilshire, and its status: ACTIVE.