Actors write books, athletes get into acting, and on it goes. This post first ran in 2016. 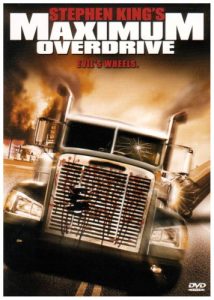 The bestselling author in question here is none other than Stephen King. His directorial effort, singular, is the 1986 “science fiction action horror comedy” film, Maximum Overdrive, based (loosely) on his short story, Trucks. The movie was a disaster both critically and at the box office, and King, who in an interview many years later swore that he was “coked out of his mind” during the entire production, vowed never to direct another film. He has kept that promise.

All of those negatives aside, Maximum Overdrive has its moments. It is so over the top that, despite the practically endless bloodletting, I’m usually laughing my butt off at all of the lunacy. And if nothing else, how could you not like a film where the majority of the soundtrack consists of songs by AC/DC!

THE DAY HORROR WENT INTO OVERDRIVE

The Earth is passing through the tail of a comet, we are informed, and will be within its influence for eight days. Objects such as lawn mowers, signs, cars, bulldozers, chainsaws, pocket radios—and of course, trucks—suddenly come alive and start killing people. In the opening scene, Stephen King appears in a cameo as a country bumpkin at an ATM machine. He stares in disbelief at some words on the display and delivers this line: “Honey, come on over here, sugarbuns. This machine just called me an asshole.” A good indication that this story is not meant to be taken seriously, no?

This ice cream truck will hunt you down.

From there we have a drawbridge opening on its own as dozens of vehicles try to cross, resulting in all manner of death and destruction. Then, a vending machine comes to life after a kids’ baseball game and shoots a can of soda into the coach’s skull. As the kids scatter, an unmanned steamroller turns one of them into a placemat. One boy escapes on his bicycle, only to ride down his street and see dead people on their lawns, hanging out of car doors and second-story windows. Eventually the kid will avoid an ice cream truck and barely get away from a crazed lawn mower.

“I should have never trimmed those hedges today.”

Most of the film’s action takes place at the Dixie Boy truck stop, somewhere in rural North Carolina. A parolee named Bill (Emilio Estevez) works there, and he’ll eventually show more cajones than just about anyone else—except maybe a hitchhiking young woman named Brett. In the midst of the ongoing horror they’ll even find time to hop into the sack.

The first truck to pull in for a fill-up is a big rig hauling toys. It has a huge, creepy Green Goblin head on its grille. Other semis will follow its lead. They sort of just hang out at first as the human fodder gathers in the restaurant, where an electric carving knife injures a waitress and an arcade machine electrocutes some poor sap. Sure, some of them try to leave, but by now the trucks have come to life and will have no part of that. Soon they circle the restaurant in an endless loop. 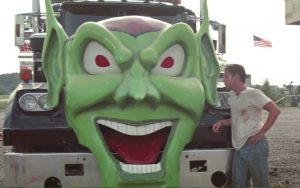 Bill has a chat with the leader of the trucks.

While those at the truck stop want out, there are actually some who want in. A newlywed couple, having been menaced on the road for miles, heads for the supposed sanctuary of the restaurant, the annoying wife whining all along the way in a chalk-on-the-blackboard kind of voice. (She’s played by Yeardley Smith, and if you don’t know that name, you’ll likely recognize her alter ego: Lisa Simpson.)

Anyway, you get the idea, and I imagine you can see why the film was nominated for a Razzie Award. The body count will continue to grow, and the folks in the Dixie Boy truck stop will be forced to plan an escape before none of them are left. Maximum Overdrive is outrageous in a campy sort of way, and as I said before, it is quite amusing—if you can look past all of the gore. One reviewer even noted that King showed promise as a director, though King would later state that Maximum Overdrive was the worst adaptation of his many novels. Maybe so, but there have been so many excellent ones that we can forgive one little speed bump.