Throwback Thursday: Atomic Radiation—What Would Filmmakers Do Without It! 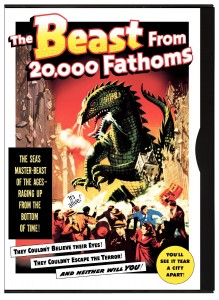 Okay, tell me what movie I’m thinking about: it’s from the 1950s, it’s in black & white, it’s about a gigantic prehistoric monster brought to life by atomic radiation and then, leaving a path of destruction, it attacks one of the world’s major cities. Easy…Godzilla, right? Wrong-o!

In 1953, nearly a year-and-a-half before the release of Godzilla (in Japanese, Gojira), Warner Bros. produced a gem titled, The Beast from 20,000 Fathoms, “suggested by” a short story in the Saturday Evening Post by no less a luminary than Ray Bradbury. With a production budget of $210,000 (today, that would feed a cast and crew for a day or two), the film grossed over $5 million and ultimately spawned countless “creature features.” More specifically, radioactive fallout from the atomic bomb became the catalyst for a number of these movies, including my favorite from this era, the 1954 classic, Them! (See my post, “Santa Claus Vs. The Mutant Ants.”) 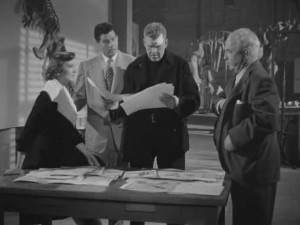 Nesbitt and another witness identify the Beast.

NO IGUANAS IN THIS FILM

The story opens beyond the Arctic Circle with an atomic bomb test. After the blast, scientist Tom Nesbitt and a colleague ride out to take some readings. Separately, both men spot the Beast, a prehistoric Rhedosaurus (fiction), which the radiation has brought back to life. (The realistic stop-action creature was done by special effects wizard Ray Harryhausen—many steps above blown-up shots of iguanas, geckos, or bugs in other films of the ’50s.) The colleague is killed in an avalanche, and no one believes the injured Nesbitt’s rantings about a monster.

Interesting note: many films of this era ended with a cautionary last line about invaders from space, the unknown effects of atomic radiation, etc. But in Beast, that line came from Nesbitt near the beginning when he said, “What the cumulative effects of all these atomic explosions and tests will be, only time will tell.”

Nesbitt winds up in a New York City hospital to recover from his physical and (perceived by others) mental wounds. While there, he learns of two boats being destroyed off the coast of Canada by a “sea serpent,” according to surviving crewmen. No one believes these witnesses either. 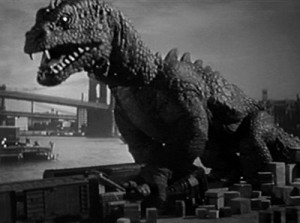 Nesbitt seeks the support of renowned paleontologist Thurgood Elson, who is at first reluctant to believe him. With the help of Elson’s attractive assistant, Lee Hunter (it’s the ’50s, so ya gotta have a love interest), Nesbitt finally wins the old guy over when both he and one of the witnesses identify the same drawing as being that of the Rhedosaurus. Further convincing are two more incidents: the destruction of a lighthouse in Maine and some buildings in Massachusetts. Seems that the Beast, according to Elson, is making its way to the Hudson River Canyon, where it was spawned.

Now the Navy gets involved, and Elson descends into the canyon in a diving bell to look for the Beast. Both he and a sailor spot the Beast and are in awe of it—until seconds later, when the monster crushes the diving bell and kills them both. 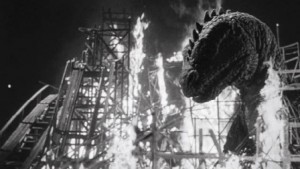 No fun at the amusement park.

Panic ensues when the Beast comes ashore in lower Manhattan, stomping on scores of people before the military manages to wound it. Leaving a good deal of blood behind, the Beast retreats into the sea. But as the soldiers begin to drop like flies, Nesbitt realizes that the blood contains something virulent and contagious. He knows that if the Beast is blown away by conventional means at the next confrontation, the contagion could spread. His solution: shoot a radioactive isotope into one of the wounds, destroying it from within.

SPOILER ALERT: in a seriously cool scene, the Beast reappears in an amusement park and starts chowing down on some of the rides. Nesbitt has loaded the isotope into a rifle grenade. He and a military sharpshooter ride to the top of a rollercoaster to get a clearer shot. The grenade hits its mark; the Beast topples to the ground and thrashes about, finally dying, as the amusement park burns all around it. End of story.

The Beast from 20,000 Fathoms was a groundbreaking movie for the 1950s. If you haven’t watched it for a long time—or if you’ve never seen it—you might want to give it a try.