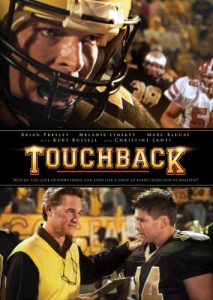 The 2012 film, Touchback, is another inspirational sports movie that you undoubtedly missed. I viewed it on Netflix last year because I enjoy sports movies, and because Kurt Russell, one of my favorites, had a co-starring role in it. The film proved a pleasant surprise, and a copy of it is now a part of my collection.

The year is 1991, and tiny Coldwater High School is playing a large school from Cleveland for the Ohio state championship. Despite being huge underdogs, Coldwater boasts Scott Murphy (Brian Presley) as its quarterback. Scott has been voted the state’s Player of the Year. He has a full scholarship to Ohio State University, is already considered a pro prospect, and his girlfriend Jenny is the brainiest and most beautiful girl on campus. If anyone can help Coldwater pull an upset, it is Scott, who has kept them in the game throughout. 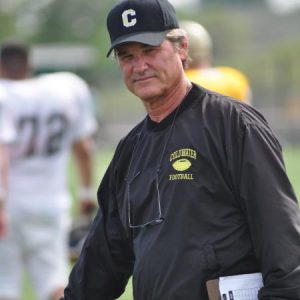 Coach Hand (Kurt Russell) is like a father to Scott.

The big school scores a touchdown with only seconds left to go up by four points. Scott volunteers to run back the kickoff, and he does well, taking it to the opponent’s thirty-yard line. There is only time for one more play. Scott confers with Coach Hand (Russell), who wants him to throw a pass to Hall, his best friend, in the end zone. Scott chooses instead to run the ball, and as time expires he leaps over the goal line. Coldwater wins the state championship—but Scott suffers a debilitating injury. His leg is shattered in multiple places.

Fast-forward to 2011. Scott, now thirty-eight, is a farmer in Coldwater. He wears a permanent brace on his leg and a nearly permanent scowl on his face. Obviously things did not work out for him back in 1991. We see him arriving home in his battered old pickup truck after a night of drinking with the boys. His wife, Macey, is a plain-looking but sweet and supportive woman. They have two young girls who love their daddy. 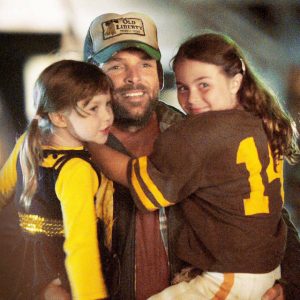 Scott wants to do so much better for his daughters.

A while back, Scott had been laid off at the local factory, the same one where his late mother, a single mom, worked night shifts to help her son realize his dream. The farm, and Macey’s minimum-wage job, are their only sources of income, and things are not going well with the former. They’ve missed some payments on a loan, and the bank is about ready to foreclose.

Coach Hand, now longer in tooth but still coaching at the high school, hopes that Scott will come to tomorrow’s game, where the 1991 team will be honored at halftime. We can pretty much tell that the depressed Scott has no intention of attending. His misery is heightened by the appearance of Hall, once his best friend and for years an NFL star, along with his wife, Jenny—Scott’s high school sweetheart.

Scott has a soybean crop that is nearly ready to harvest. If he does it now, the proceeds may enable him to get the loan up to date and stave off foreclosure. But he needs to act quickly, because an early frost is coming in that could destroy the crop. He rents a combine, the only one currently available, and begins harvesting the beans. But the machine breaks down, leaving him with no options. Macey suggests they pick the beans by hand, but there are 200 acres to harvest, so that is not going to happen.

At the end of his rope, Scott drives his truck into a field and considers what to do. He decides to commit suicide, thinking that his life insurance policy will provide for Macey and the girls. (Wrong; life insurance does not pay off on people who kill themselves.) He stuffs a rag in the tailpipe, turns on the ignition, and waits. Soon the exhaust swirls around him. His head drops to the steering wheel… 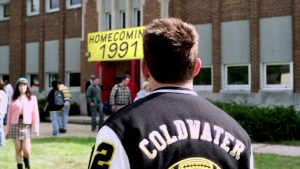 Scott cannot believe where fate has taken him.

…and someone raps on the window. Scott looks up to see that the interior of the truck is brand new. He is young-looking, clean-shaven, and the brace is gone from his leg. He wears his high school jacket, as does his friend Hall, the rapper, who tells him that they’re going to be late for class unless Scott moves his butt.

It is 1991 again, a few days before the Ohio state championship game, and Scott, who retains all of the memories of his future life, has a chance to do it all over again.

And therein lies the heart of the story…which means that I’ll stop here so as not to give anything away. Knowing what is ahead, how can Scott change the outcome?

Touchback had limited distribution, and accordingly it did not do well at the box office. Many fine films suffer this same fate. But check it out if you can; I don’t think you’ll be sorry.