Happy Turkey Day! I actually presented this post for the first time on Thanksgiving in 2012. What better day to talk about a turkey?

This being Thanksgiving, it seems appropriate to write about a turkey of a movie. I’m talking about Mimic 2, the 2001 sequel to one of my favorite horror flicks, Mimic (duh). In 1997’s Mimic we had an Academy Award-caliber cast (Mira Sorvino, Josh Brolin, F. Murray Abraham), a creepy plot ( giant mutated cockroaches that can take human shape before they do their nasty deeds), and claustrophobic settings (primarily the underground below the New York City subway system). I ultimately wrote about Mimic in a more positive vein. It is a definite must-see for horror fans, in my humble opinion. Check out “Guilty Pleasures: Mimic.”

Some years ago I bought the three-film set (yes, there is a third, called Mimic: Sentinel) and gladly renewed my acquaintance with the original. In all honesty, I didn’t even know that any sequels had been made. The first red flag: Mimic 2 was not even a theatrical release, instead going directly to video. Second, considering the all-star cast of Mimic, this one featured Alix Koromzay, Bruno Campos, and Will Estes. ’Nuff said.

Koromzay, as teacher/entomologist Remi Panos, is the only link to the original, in which she played such a small role that many who saw the sequel did not even remember her. Quick plot summary (with the usual spoiler alert): three guys are found strung up on power lines in New York City, their faces torn off. A cop named Klaski (Campos) links all three to Remi, who is now being stalked by one of the giant cockroaches. The bug, wearing the face of one its victims, wants to mate with Remi (really.) 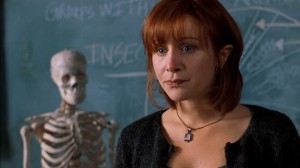 Eventually, Remi and a couple of her students get trapped in her school, with the bug stalking them. A mysterious special forces team led by a guy named Darksuit (really) fumigates the building as Klaski goes in to rescue Remi. She manages to make it out, but the inspection team finds the bug’s vacated husk, as well as Klaski’s corpse.

The cockroach, now wearing Klaski’s face (really), shows up at Remi’s place, anxious to get it on with her. She figures it out (maybe it was his hard shell) and decapitates the thing. The end? Nuh-uh, because cockroaches, which survive nuclear holocausts and Ice Ages, can live for some time without their heads (really). What will Remi do now? End of story (really). 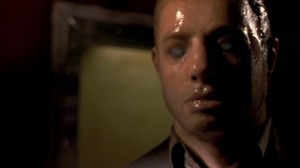 Hardshell is not exactly human…

This storyline should tell you all that you need to know about Mimic 2. One reviewer proclaimed, “Incompetent and unimaginative on just about every level.” Couldn’t have said it better myself.

So what about the third entry, Mimic: Sentinel? Okay, I’ll tell you: way worse than the second one. It was billed as a bug-infested “remake” of the classic thriller, Rear Window. Tell the truth, I’ll take James Stewart and Grace Kelly anytime.