Last week I thanked ERB for being my inspiration to write. This 2012 post details his interesting life. (A great Kindle deal on a couple of my own “lost world” novels can be found at the end of this post.)

In a recent post I noted that Edgar Rice Burroughs was the single greatest source of inspiration for both my love of reading and my own writing career. With the re-release of the first book I ever wrote, The Master of Boranga—which had the Burroughs stamp all over it—I decided to pay homage to this great American storyteller. Here is a post covering the life of the master of lost worlds.

ERB was born in Chicago in 1875. His father was a Civil War veteran, much like John Carter, the main protagonist in ERB’s Mars series, arguably his second-most popular creation. He attended a number of military academies but came up short in his dream of getting into West Point. Instead, he enlisted in the army—more specifically, the cavalry, given his love of horses. He wound up in Arizona Territory with the 7th U.S. Cavalry in 1896, but illness forced him from the service in 1897. (John Carter just happened to be prospecting in Arizona Territory when he found himself inexplicably transported to Mars.) 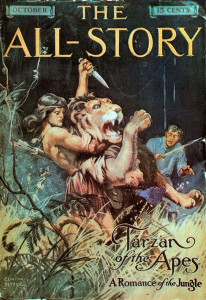 Afterward, it took ERB quite a few years to “find himself.” He worked at a number of unsatisfying jobs in Idaho, where a brother lived, and Chicago, finally settling into a position with his father’s company in 1899. In 1900 he married Emma Hulbert, whom he’d known since they were children. They went on to have three kids, daughter Joan and sons Hulbert and John. (Years later Joan would marry James Pierce, one of the many actors who portrayed Tarzan on the screen.) ERB left his father’s firm in 1904, and for many years the family bounced back and forth between Idaho and Illinois as he took one job after another, earning little money.

In 1911, while working as a wholesale distributor for lead pencil sharpeners, Burroughs used his spare time—there was a great deal of that—to write his first story. He was thirty-five years old at the time and, by his own admission, had no clue as to writing technique. His motivation was to earn money, and as he read a great many of the pulp magazines at the time he figured that, in his own words, he “…could write stories just as rotten” as what he was reading. He used the nom de plume of “Normal Bean” to write what he called, among other titles, My First Adventure on Mars, The Green Martians, and finally, Under the Moons of Mars. (As a book, years later, it would be called A Princess of Mars.) The story, which introduced soldier of fortune John Carter, was serialized in All-Story magazine the following year. ERB had found his calling. 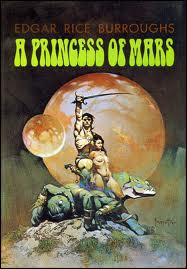 With his business prospects bleak, and with a sale to his credit, ERB began his career as a full-time writer. He finished two novels by the time the first Barsoom story was published, one of them a jungle adventure titled, Tarzan of the Apes, the story of a British nobleman, John Clayton, Lord Greystoke, who as a child is orphaned in Africa and subsequently raised by apes. Needless to say, Tarzan became one of the most iconic figures in all of literature and film, and he assured the future success of his creator. Tarzan movies hit the screen in 1918 with a silent version starring Elmo Lincoln, and they continue to this day. In July 2016 another one, The Legend of Tarzan, hit the theaters. How’s that for spanning nearly a century!

Now able to do whatever he wanted, ERB took his family on a number of trips, notably to California. Years ago, when I moved to San Diego, I was excited to learn that the Burroughs family spent the winter of 1913 in Coronado, at 550 A Avenue (pictured). Needless to say, I’ve been down that street a few times since. Hey, we all need our shrines, don’t we?

Even more of a shrine is the town of Tarzana, in the San Fernando Valley northwest of Los Angeles. ERB purchased the land later in that decade, and the town officially adopted the name in 1927. I went there for the first time in the 1980s and felt as if I were on hallowed ground.

ERB’s output over the three decades subsequent to his initial venture as a writer is staggering. The Barsoom series (eleven books); Tarzan (over two dozen books); Pellucidar—the Earth’s Core series—(seven books, one of them Tarzan at the Earth’s Core, a crossover); the Venus series (five books); the Caprona series (three books); plus many other diverse works, including four western novels. To the best of my knowledge, I have them all—many in duplicate.

Even while on such a great ride, ERB did have some rocky times, both with his business ventures and his personal life. He and Emma were divorced in 1934, and the following year he married Florence Dearholt, whom he also divorced in 1942. Just prior to the latter he was living in Hawaii when Pearl Harbor was bombed, and despite his age—sixty-six at the time—he became a war correspondent. After the war he returned to California, settling in Encino, near Tarzana. He subsequently battled a number of health issues, until finally, at the age of seventy-four, ERB passed away in March of 1950. He was cremated, and by request his ashes were buried under a tree in front of his Tarzana offices. 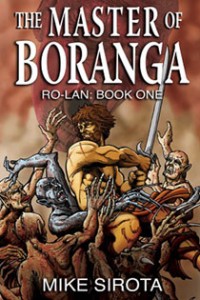 As I titled my previous post: Thank You, Edgar Rice Burroughs. Your stories, your characters will live on forever.

ERB’S INFLUENCE ON ME