Myths And Legends: The Cannibals Of Ancient Scotland

When Wes Craven, the late film director, needed source material for his 1977 horror classic, The Hills Have Eyes, he turned to a story that combined truth and possibly fiction. An easy choice: he referenced the legend of Sawney Bean.

For those who are not aficionados of horror flicks, The Hills Have Eyes is about an isolated family that preys on travelers, ultimately killing and eating them. Pretty gross; but as you’ll see, this bunch did not hold a candle to the clan of cannibals that plied their perversions about five centuries ago.

FACT, FICTION—OR A BIT OF BOTH?

Alexander “Sawney” Bean was born in the small Scottish village of East Lothian during the 16th century. It is not known how he developed a taste for human flesh, but obviously he could not fit into what passed for the mainstream at the time. Remarkably, he found a soul mate (soulless mate?) in a violent woman named “Black” Agnes Douglas, who many believed was a witch. Together they robbed, murdered, and cannibalized their first victim in the town, which prompted them to get outta Dodge, posthaste.

After traveling around for a time the couple discovered a coastal cave at Bennane Head, near another village called Girvan. The deep cave went back about 600 feet, and its entrance was blocked by water during high tide. A perfect place for Sawney and Agnes to set up housekeeping. Before they were finally discovered, they lived in this cave for twenty-five years!

NOT YOUR AVERAGE FAMILY

Sawney and Agnes produced fourteen children and thirty-two grandchildren. The latter, obviously, included products of incest. It did not take them long to have a veritable army of cannibals.

The clan did much of its work at night, when low tide allowed them to return to the cave with their victims. They ambushed people along various roads, murdering them and carrying the bodies back to the cave, where—hold onto your lunch—they dismembered and ate them. Any leftovers they deemed edible went into barrels, to be pickled. Skeletons and body parts were removed from the cave, some of it hidden, some deliberately tossed in the ocean, where it would wash up on nearby beaches. The shrewd Sawney did this on purpose, to deflect any suspicions from townspeople that these victims were murdered, but rather had been killed by wild beasts.

There is undoubtedly fact and fiction in the following statement, since no one could really be certain: during their twenty-five-year reign of terror, the Bean clan murdered and ate between 1,000 and 5,500 people!

DON’T MESS WITH A SWORDSMAN

That is not to say that many of the disappearances went unnoticed. Over time the local villagers sent out search parties to look for the perpetrators. Given the ignorance of the times (i.e., witch burnings) they arrested and hanged a number of people who had nothing to do with the killings. As they quickly learned, the disappearances went on.

One night, the clan attacked a couple returning from a fair. The wife was killed, but the husband, a skilled swordsman, deftly held off the attackers until a larger group of fairgoers appeared. The clan fled, while the others took the wounded man into the village and informed the magistrate of what they had witnessed.

From there, the wheels of justice began to roll. The king of Scotland at the time took it upon himself to lead a force of 400 men and a few bloodhounds to search for the perpetrators of these atrocities. They found the cave and captured the clan but were sickened at what else they discovered there: remains of bodies hanging from the walls, arms and legs crammed in barrels, as well as valuables stolen from their victims. 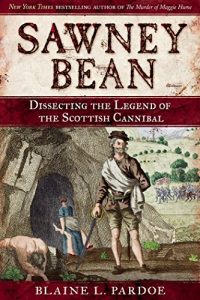 From there, the story descends into speculation as to the fate of Sawney, Agnes, and their family. One version says that gunpowder was used to blow up the cave entrance, suffocating all inside. Another posits that the clan was taken to a larger town, possibly Glasgow, where the males had their hands, feet, and genitalia cut off and bled to death, while the women and children were burned alive. Whatever one believes, the long reign of terror by Sawney Bean, “Black” Agnes Douglas and their offspring had finally come to an end.