It surprised me to discover that this country harbored so many haunted roads, from East Coast to West Coast. I did write about one such road, which ran through a portion of Nebraska. (See my post, “Myths And Legends: Seven Sisters Road.”) But as many truckers can tell you, that is just the proverbial tip of the iceberg. Here’s the skinny on a couple of them. 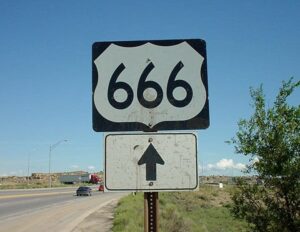 That’s what Route 666 was called, and for an obvious reason. This challenging road, which I actually drove on in 1996, runs through portions of three states in the Four Corners region: New Mexico, Utah, and Colorado. These days you won’t find the 200-mile road on the Triple A Indian Country map anymore, or any state map. Why? Because all of its “bad press” caused New Mexico to change its share to Highway 491 in 2003, during a renovation. The other states soon followed suit.

So what did the Devil’s Highway have in store for unwary travelers? To begin with, there were numerous accidents on the road, and over time folks associated them with its designation, 666 being “the number of the beast” in the New Testament’s Book of Revelations. Drivers—especially truckers—began to avoid the road like the plague. They also heard about a legend—likely a myth—that a haunted truck would appear out of nowhere, usually late at night, and force vehicles off the road. Creepy, to be sure, but real? Who knows…

This one ranks high the “Weird as Hell” meter. Interstate 44 in the Midwest bisects a number of surrounding roads that connect the towns of Joplin, Missouri, Miami, Oklahoma, and Columbus, Kansas. Truckers are quite familiar with the roads comprising the Spooksville Triangle, having heard—and possibly experienced—the legends, which began over a century ago.

The stories, first off, have to do with red and yellow lights, a whole lot of them, that appear on all of the roads without warning and bounce from one side to the other. Some attribute them to an old man walking along and swinging a red lantern. Others believe that they are spirits of folks who lived and died in the area, or a weeping mother searching for her lost daughter.

Ghost cars, ominous dark figures, disembodied voices, even a vanishing hitchhiker—the Spooksville Triangle has it all. Start your own “ghost tour” at the Joplin truck stop, which truckers say might have the creepiest aura of all.

As I mentioned, there are many more haunted truck roads across the U.S. of A. We’ll drive along more of them in future posts.