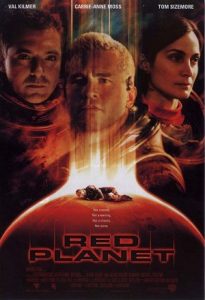 Uniformly poor reviews? A box-office bomb? Yes indeed, the 2000 sci-fi thriller, Red Planet, fits within all the parameters of a guilty pleasure. But as noted many times before, I’m easily entertained, so I have no problem checking it out every once in a while. A solid cast helps the medicine go down.

A WORLD IN CHAOS

Mid-way through the twenty-first century, Earth is in some serious shit. Climate change, over-population, pollution, etc. has created a major ecological crisis. We learn about this in an opening voice-over by space ship commander Kate Bowman (Carrie-Anne Moss), who is about to helm a desperate mission to Mars. Previous automated missions have seeded the planet with oxygen-producing algae, a first step in terraforming Mars for future colonization. Now, Bowman’s crew of scientists aboard the Mars-1 rocket will see what progress has been made. 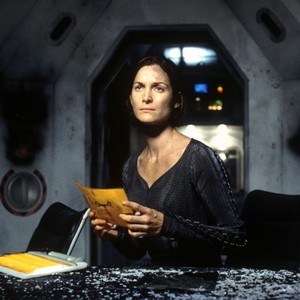 Bowman is not sure how to save her crew.

Approaching the planet, the ship is badly damaged by a Gamma-ray burst. Bowman orders her crew—geneticist Burchenal (Tom Sizemore), scientists Chantilas (Terence Stamp) and Pettengill (Simon Baker), engineer Gallagher (Val Kilmer), and pilot Santen (Benjamin Bratt)—into the landing craft, along with a military robot called AMEE, a navigating tool. The lander crashes off course. AMEE is lost, and Chantilas suffers a ruptured spleen. He insists on being left behind to die.

As Bowman works furiously to repair the orbiting Mars-1, the survivors head for an automated Habitat that had been sent up earlier to provide food, water, and oxygen. They reach it, only to discover that it has inexplicably been destroyed. With little air remaining in their suits, they are doomed. As they await their fate, Santen and Pettengill get into an argument. Pettengill accidently pushes Santen off a cliff to his death. He tells the others that Santen committed suicide; after all, they were all going to die. But surprise, when Gallagher removes his helmet, he finds the air breathable. Apparently the algae had worked, to some degree. They’re saved—for now. Without food or water the reprieve is temporary. 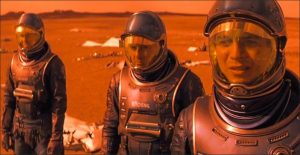 No air, no water…no hope.

And if that isn’t enough of a problem, AMEE becomes functional, the crash changing its program from navigational to military mode. The latter program makes the robot a deadly enemy that will do anything to survive. When it shows up at the Habitat, the men attempt to remove its guidance system. Bad move; it breaks Burchenal’s ribs and escapes.

Gallagher repairs a broken radio from the Habitat and manages to make contact with Bowman, who was just about to leave orbit and return to Earth, as ordered. She tells them that their only chance of getting off the planet is an old Russian probe, located some distance away. Big problem though: the probe can only hold two people. 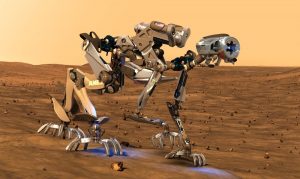 AMEE has become a serious threat.

The guys set out for the probe, with the injured Burchenal creating a burden. They also have to remain on guard against AMEE. Time is critical, as Bowman must soon leave the decaying orbit. Pettengill, riddled with guilt, is clearly losing it. And if all of that is not enough, the planet is about to get hit by an ice storm. Some perilous times ahead…so here is where I’ll leave you, in case you want to check out this guilty pleasure for yourself.

Granted, Red Planet is far from the best sci-fi flick that I’ve ever seen. But I do think the critics were overly harsh…like, what else is new!