The 1997 sci-fi/horror flick, Mimic, is one of my favorites, though to date I had not written about it (that changes today). Maybe it had to do with my utter disappointment with its two direct-to-video sequels. Let me explain.

On Thanksgiving 2012 I wrote a post called, “A Real Turkey,” which had nothing to do with the holiday and everything to do with Mimic 2. I had purchased the “Mimic 3-Film Set,” and to be honest, I hadn’t even known about the sequels. Now I wish I’d never found out. You can read the old post for my thoughts on Mimic 2, but just so you know, Mimic 3: Sentinel was even worse. And that took some real doing.

But, since I don’t like being negative, let’s talk about the original. First off, a good 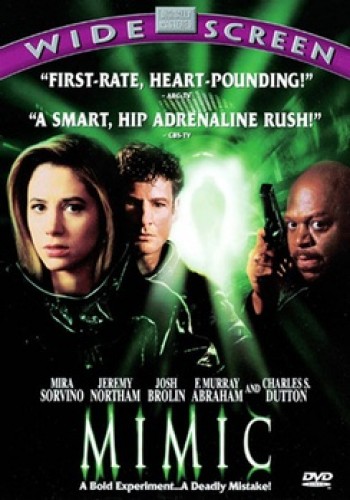 director and cast can always benefit a movie. Mimic, directed by Oscar-nominated Guillermo del Toro, features Oscar winners Mira Sorvino and F. Murray Abraham, Oscar-nominated actors Josh Brolin and Giancarlo Giannini, and capable pros Charles S. Dutton and Jeremy Northam. And the screenplay itself was adapted from a short story by science-fiction giant Donald A. Wollheim. A lot going for it, don’t you think?

“EVOLUTION HAS A WAY OF KEEPING THINGS ALIVE”

The story synopsis, with no spoiler alert, as I don’t want to ruin this one: a deadly disease carried by common cockroaches is killing children all over Manhattan. Entomologist Susan Tyler (Sorvino), assisted by her husband, Dr. Peter Mann (Northam) of the CDC, develops a large, weird-looking roach called the Judas Breed, a sort of termite/mantis mix, which eventually kills off all the diseased insects, making Susan a hero. The Judas Breed, all females with a short lifespan, were supposed to die off quickly. But, as they said in Jurassic Park when they did the same thing, “Life finds a way.”

A few years later an autistic kid named Chuy sees a guy pulled underground by what looks like a man but is actually one of the Judas Breed, now gigantic and able to “mimic” humans. They actually look like flashers in long raincoats. CDC guy Josh (Brolin) investigates and finds some really big roach poop. He also notices that the place where the guy got pulled down connects to the subway tunnels. 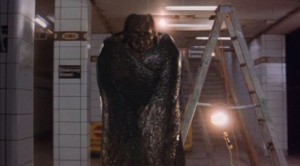 How would you like to run into this in the subway?

Susan buys a “weird bug” from a couple of street kids. They found it in the maintenance room of a subway station. Tests show that it is one of the Judas Breed, an infant. Dang, they didn’t die off. She asks the kids to look for an egg sac. They go back into the tunnels, find one—and are promptly killed by one of the roaches. Another one of the creatures steals the specimen out of Susan’s lab. She and Peter investigate a dead Judas at a water treatment plant. Speculation is that a large colony now exists somewhere in the subway tunnels.

Chuy, the autistic boy, goes across the street to a storefront church at night looking for the “man” he calls “Mr. Funny Shoes” and promptly encounters some of the Judas dudes. His fate, for now, is unknown. His father, shoe-shine guy Manny (Giannini) follows the next morning.

Susan and Peter, having been denied access to the maintenance room where the kids found the first specimen by outrageous, by-the-book security guard Leonard (Dutton), return with a warrant. Peter, Josh, and Leonard go underground, while Susan, still on the platform, studies a photo they had taken of a dead Judas. When she folds it over, the two halves of the carapace form—gasp!—a human face. A live one then appears on the deserted platform, takes to flight—yeah, they have wings—grabs Susan and disappears into the subway tunnel. 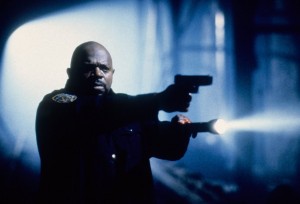 Leonard don’t take no shit from the Judas Breed…

As you’ve probably figured out, everyone is now underground—not along the main routes that most all of us have used when in New York City (“Stand clear of the closing doors, please…”) but even deeper, in tunnels that have not been used in decades. Somewhere down there is a queen Judas, and if they don’t destroy her…well, can you say Armageddon? Menaced by more of the huge insects—Josh has already been killed—the largest group takes refuge in an ancient, long-unused subway car, and…

And I’m not gonna tell you much more. I promised no spoilers, and much of the best and revealing stuff happens down here during the last half of the movie. I will say this: veteran actor Dutton steals many of the scenes as Leonard with some over-the-top dialogue and by singing to calm his nerves as the creatures approach. At one point they find a load of roach poop hanging from the ceiling, and Peter asks Leonard if he’s ever seen anything like it before. Leonard’s reply:

If you’re a masochist, then get the three-pack and have a ball…just don’t blame me. Otherwise, if you haven’t seen it already, check out the original Mimic. Great director, great cast, a solid story.